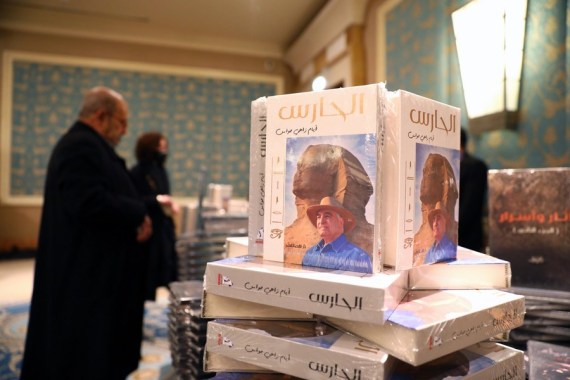 Held in a hotel in downtown Cairo, the ceremony was attended by Egyptian officials, archaeologists, authors and artists, as well as foreign guests including ambassadors and other diplomats.

The ceremony started with a presentation on Hawass’s accomplishments, excavations, archaeological discoveries, worldwide fame and testimonies of Egyptian and foreign archaeologists and public figures to his renown and charisma, including late famous Egyptian film star Omar Sharif.

“The book doesn’t only narrate my autobiography but documents the history of archeological work in Egypt in the past 40 years,” Hawass told Xinhua during the ceremony.

The 600-page book sheds light on the archaeological discoveries and accomplishments made by Hawass who once served as minister of antiquities, and the challenges he faced during excavation and restoration work.

The title of the book, “The Guardian,” was chosen by Nahdet Misr Publishing House, which has been publishing books on all cultural fields in Egypt for 84 years.

“We are honored to have published for Dr. Zahi Hawass a large collection of books over the past 18 years, whether for children or adults, and we have crowned this cooperation with Hawass’s autobiography, ‘The Guardian,'” said Dalia Ibrahim, CEO of Nahdet Misr Publishing House.

“All generations need to know his biography and his big role in reviving Egyptian antiquities,” Ibrahim added.

A discussion panel was also held during the ceremony to analyse the value of the book and its contents, followed by a question and answer session.

Among the attendees were Minister of Tourism and Antiquities Khaled El-Enany and director of Bibliotheca Alexandrina Mostafa El-Feki, Hawass’s close friend who wrote the back-cover blurb of “The Guardian.”

“I had the honor to introduce his autobiography on the back cover. I consider this book a reference for everyone who would like to know about the Egyptian antiquities and their popularity during the time of Zahi Hawass,” El-Feki told Xinhua.

“I’ve always called for appointing Hawass as Egypt’s ambassador for tourism, antiquities and culture to the whole world and I believe his popularity certainly reflected on his promotion of Egyptian antiquities,” said the head of Bibliotheca Alexandrina.

“This book is so interesting that once you start reading the first page, you won’t stop until you finish the whole book,” Waziri said.