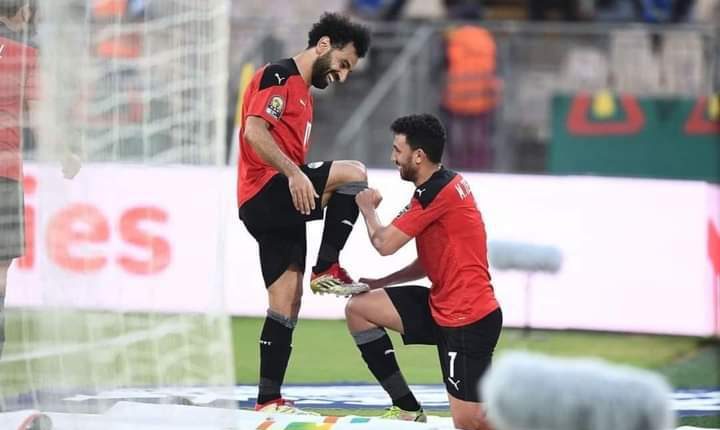 In an unforgettable night, Egypt defeated their North Africa rivals Morocco (2-1) to secure a spot in the semi-finals of the Africa Cup of Nations (AFCON). The awe-inspiring quarter-final game was held on Sunday at the Ahmadou Ahidjo Stadium in the Cameroonian capital, Yaoundé, which has a capacity of 50,000 fans.

Morocco’s Sofiane Boufal netted the first goal for the Atlas Lions very early in the first half. Afterwards, the Pharaohs dominated the game until the break but could not score. In the second half, the Egyptian team’s brilliance continued and Liverpool star Mohamed Salah scored the equalizer for Egypt. Due to the very intense play and fatigue, the Pharaohs suffered several muscular injuries as the game went to extra time.

In the second 15-minute half of extra time, substitute Mahmoud Hassan “Trezeguet” netted the winning goal for Egypt with a superb finish after an astonishing assist from Salah.

This triumph sent Egypt to the semi-finals for the record 16th time in the history of the tournament. The Pharaohs vowed to go far in this AFCON as they look forward to winning their eighth continental title. Morocco, on the other hand, won one African title 43 years ago.

Sunday’s confrontation witnessed a strong and fierce competition due to the distinguished elements that each team possesses, whether at the continental level or in international football.

Earlier on Saturday, hosts Cameroon and Burkina Faso qualified to the semi-final stage.

At the Japoma Stadium in Douala, Cameroon ended Gambia’s fairy-tale run with a 2-0 win. After a goalless first half, the Indomitable Lions roared by vociferous fans, returned with renewed strength and determination to win debutants Gambia. Cameroon eventually broke the deadlock in the 50th minute when Collins Fai’s pinpoint delivery from the right wing landed on Karl Toko-Ekambi’s head and into the net. Seven minutes later, Olympique Lyon striker Toko-Ekambi scored again to double the gap with a close-range finish. The 29-year-old has so far produced five goals at AFCON, chasing his teammate Vincent Aboubakar who scored six goals.

Five-time champions Cameroon will face Egypt on Thursday in the semi-final.

Meanwhile, Tunisia’s AFCON roller-coaster campaign came to an end after they lost 1-0 to Burkina Faso at the Roumde Adjia Stadium of Garoua. Dango Ouattara scored the game’s only goal and was sent off as Burkina Faso quelled Tunisia’s dreams. The Carthage Eagles of Tunisia reached the quarter-finals after three defeats out of their five games (against Mali, Gambia, and Burkina Faso), and two wins (against Mauritania and Nigeria).

On Sunday night, Equatorial Guinea faced Senegal for the last spot in the semi-finals. The winner will meet Burkina Faso.