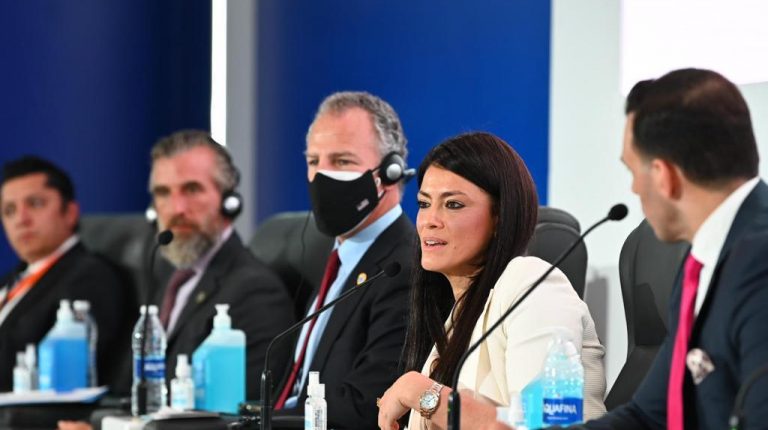 The Egyptian version of the United Nations’ ‘Generation Unlimited’ initiative was launched under the name ‘Country’s Youths’ during the ongoing World Youth Forum (WYF) in Sharm El Sheikh under the auspices of Egyptian President Abdel Fattah Al-Sisi.

The international initiative is the first partnership between the government sector, the private sector, and global youths to provide skills training and connect the 1.8 billion 10- to 24-year-old youngsters from around the world with employment, entrepreneurship, and positive social impact opportunities.

Minister of International Cooperation Rania Al-Mashat affirmed that “the platform is a unique cooperation between international agencies represented in the United Nations and other developmental partners who support the initiative, the government, young people, civil society, and the private sector.”

She added that the new platform endorsed Egypt’s 2030 Vision, which targets empowering young people by creating training and educational opportunities and to provide them with the skills necessary for the labour market as well as encourage them to become entrepreneurs and active participants in society.

“I call on the private sector, civil society, and youths to join hands and actively participate in the Country’s Youths platform. Uniting efforts and directing investments will achieve the country’s youth development goals as part of Egypt’s 2030 Vision.”

The original global initiative, Generation Unlimited, was launched at the 73rd session of the United Nations General Assembly in 2018, to bring together world leaders, public, private and youth-led institutions to partner, finance, and provide scalable solutions for young people; thus, contributing to the operationalisation of the United Nations Strategy on Youths and progress in achieving the sustainable development goals. The initiative adopts the concept of “learning to earn” as a way to align youths’ capabilities with the needs of the labour market.

In a recorded speech where she praised the WYF, UNICEF Executive Director Henrietta Fore said the global initiative “has an audacious goal — to have every young person in the world have a chance to go to school, learn, train or have an appropriate job by 2030.”

“Our youths — or as you say in Arabic, “Shabab Al-Balad” — are the most critical agents for positive change. Their creativity and innovation are already helping to create solutions to the problems we face.”

In his keynote speech at the launch of the Country’s Youths platform, Kevin Frey, the CEO of the International Initiative, said: “We are proud of everything we have collectively accomplished in our first three years. In just such a short time, the international platform has reached 220 million young people along with more than 3,000 partners, operating in over 50 countries, with opportunities for skills acquisition, employment, entrepreneurship and social impact.”

“The platform aims to put young people at the heart of everything we do,” said the United Nations Resident Coordinator in Egypt, Elena Panova.

“Egypt is a regional power that has strong partnerships with the rest of the world. We strongly believe that through the meaningful engagement of all stakeholders, the Country’s Youths platform will have a tremendous impact on youths in the entire country.”

Jeremy Hopkins, the UNICEF’s Representative in Egypt, said that “Egypt’s strong vision for 2030, specifically with regard to education, entrepreneurship, and employment, provides the basis on which the platform can play an important role in supporting and motivating the progress of the country’s youths.”

He added that “the platform is not just a programme, but rather a movement that includes the entirety of society.”

“The United States is the single largest donor to UNICEF’s work globally. Our $4 million ‘Creating an Enabling Environment for Adolescent Girls’ project in Egypt helps girls gain job skills, supports their health, and helps civil society and local governments provide the necessary services. We look forward to our continued partnership with UNICEF, as well as international and local public and private sector counterparts, to advocate for the lives of Egyptian youths,” said Jonathan Cohen, the US Ambassador to Egypt.