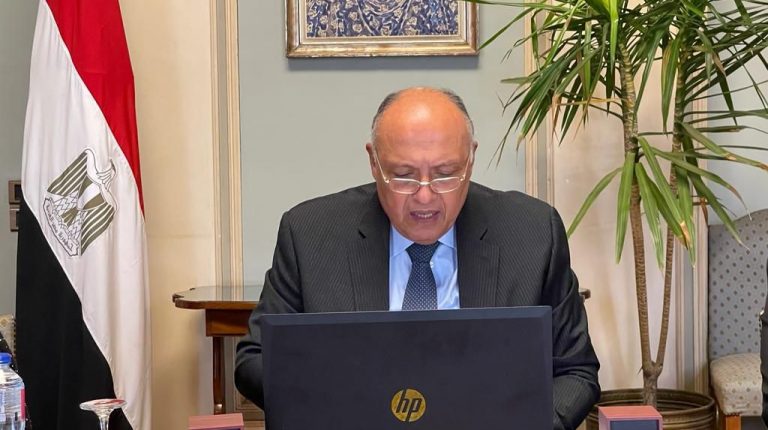 On behalf of President Abdel Fattah Al-Sisi, Egypt’s Foreign Minister Sameh Shoukry has participated in the third semi-annual coordination meeting of the African Union )AU) and the regional economic groupings, which were held via video conference.

Ambassador Ahmed Hafez, the spokesperson for the Ministry of Foreign Affairs, stated that Minister Shoukry delivered the speech of President Al-Sisi during the meeting, in which he expressed his appreciation for the efforts made in holding the third edition of the coordination summit meeting, as it is the main forum for discussing the state of integration in African continent.

Hafez added that the Minister Shoukry indicated Egypt’s interest in following up on the progress made since the convening of the first coordination summit, which was chaired by President Al-Sisi in July 2019.

He explained that this summit inaugurated a path to develop the main references for continental and regional integration and paved the way for positive, tangible steps to be taken in achieving the continent’s development agenda.

Minister Shoukry also noted that the COVID-19 pandemic, despite its difficult challenge, provided an opportunity for African countries to enhance cooperation among themselves, especially in terms of highlighting the true meaning of the objectives of the African Union Agenda 2063.

He added that Egypt was not far from that, whether through its contributions to support the African Center for Diseases (Africa CDC) and Epidemics and the Corona Response Fund, or by providing continuous support to brotherly African countries in order to enhance their capabilities and meet their needs in this regard.

Hafez concluded his statements by referring to the Minister of Foreign Affairs’ assertion of the pivotal role of the African Development Agency (NEPAD) in mobilizing the necessary resources to invest in the continental integration agenda, which is inseparable from regional integration.

He said that the Continental Infrastructure Development Program (PIDA) represents the most prominent cornerstone for achieving the desired integration, and a fundamental pillar for activating the Continental Free Trade Area (CFTA) in light of its expected role as a new locomotive for development in the African continent.