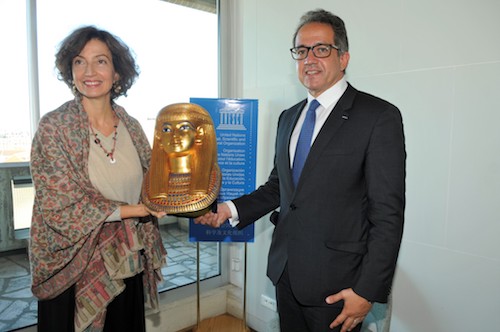 Khaled El-Anani, Egypt’s Minister of Tourism and Antiquities, met with Audrey Azoulay, Director-General of UNESCO, at the organization’s headquarters, to discuss many topics related to heritage and civilization, and ways of cooperation during the coming period.

During the meeting, the latest developments in the projects implemented in cooperation with UNESCO in the field of antiquities and heritage preservation were discussed and reviewed.

El-Anani presented Azoulay with a replica of Yuya’s mask which is preserved in the Egyptian Museum in Tahrir. Azoulay visited the museum last April on the sidelines of her participation in the Royal Mummies Parade. She was also invited to attend the opening of the Rams Road in Luxor during the coming period.

El-Anani gave a lecture last Friday on Egypt’s efforts in the fields of archaeological discoveries, artifact restoration, and development of museums, and recovering smuggled antiquities.

The lecture was held in the presence of 100 world ambassadors, specialists in antiquities and heritage, UNESCO officials, and representatives of relevant cultural associations and institutions.

During the lecture, El-Anani made a presentation about the most prominent achievements of the Egyptian state in preserving its cultural heritage, and the recent inaugurations, archaeological discoveries, and restoration projects.

He also highlighted the latest openings of new museums and restoration projects, and the efforts of the Ministry of Tourism and Antiquities to improve visitor services at archaeological sites and museums.

He also reviewed the services that the ministry is working to make available to visitors at various museums and archaeological sites.

Regarding the file of retrieving illegally smuggled artefacts, El-Anani, during the lecture, said that the ministry had recently succeeded in recovering many artefacts, the most important of which was the golden sarcophagus of Ankh, which was returned from the Metropolitan Museum in America.

At the end of the lecture, a film was screened about the Egyptian restorers and their achievements in museums, archaeological sites, and temples in Upper Egypt.