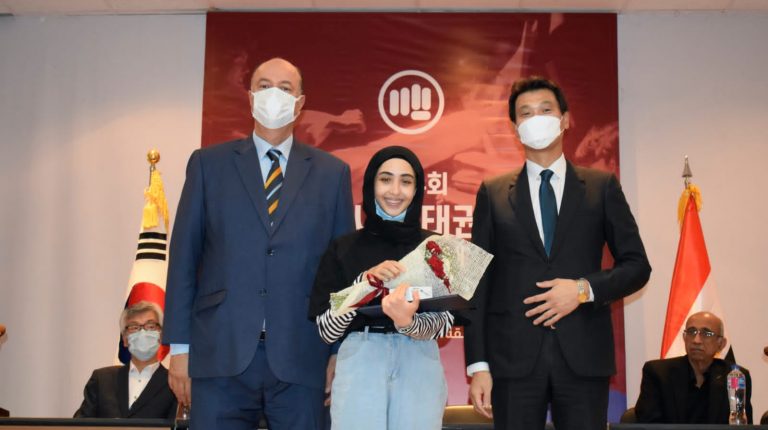 The Korean Cultural Center, in cooperation with the Egyptian Taekwondo Federation, organized Tuesday the closing ceremony of the 14th Korean Ambassador Taekwondo Cup at the Olympic Committee Hall at Cairo International Stadium in Nasr City.

Korean Ambassador Hong Jin-Wook presented the winners with trophies and certificates for their outstanding performance in the Championship, which was organized online consistent with precautionary measures to prevent Covid-19. The closing ceremony of the championship was attended by Eng. Hisham Hattab, President of the Egyptian Olympic Committee, and Amr Salim, President of the Egyptian Taekwondo Federation.

The Korean ambassador expressed his gratitude for the efforts of the Egyptian Taekwondo Federation in spreading taekwondo throughout Egypt, noting that the winning of Egyptian taekwondo players Saif Eissa and Hedaya Malak, with two bronze medals at the 2020 Tokyo Olympics, is indicative to these determined efforts by the Federation to support the taekwondo not only in Egypt but also in the Arab countries and the Middle East region.

Total of 250 players applied for the tournament. After evaluating their performance, 32 players were selected to join the tournament. Eight players will qualify for the semi-finals of World Taekwondo Poomsae Championship scheduled later this year.

Oh Sung-ho, Director of the Korean Cultural Center, pointed out that the Center organizes the Korean Ambassador’s Taekwondo Championship annually to promote taekwondo and motivate Egyptian youth to practice it. Due to Covid-19 the tournament was cancelled last year, but the Centre was keen to organize it this year as part of its plan to restore its activities, which had been suspended by the Coronavirus pandemic.

On the sidelines of the ceremony, the Korean ambassador and president of the Egyptian Taekwondo Federation signed a memorandum of understanding aimed at strengthening the Dispatch Taekwondo Master programme, a way to develop the skills of taekwondo players in Egypt.