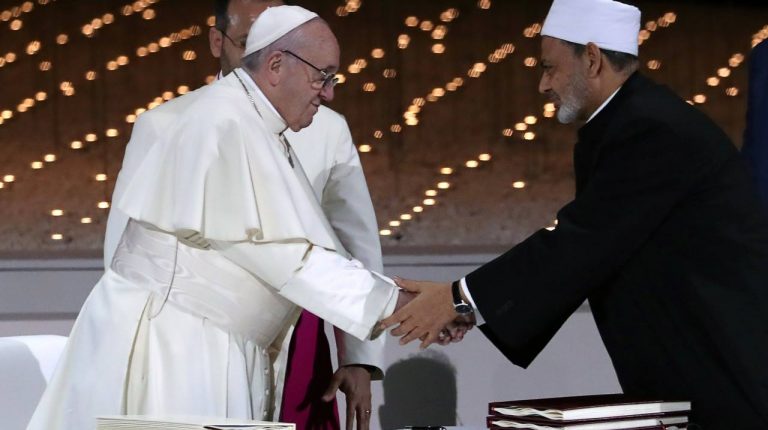 Grand Imam of Al-Azhar Al-Sharif, Ahmed Al-Tayeb, and Pope Francis of the Catholic Church, held a special summit in the Vatican, following their participation in the Summit of Religious Leaders on Climate Change, entitled “Faith and Science”.

Both leaders discussed the religious, humanitarian, and moral issues that haunt the world today, and the challenges posed by changes and events on the global scene.

The two sides also discussed the real role that religious leaders and scholars should play to reduce the intensity of war and division experienced by different regions around the world, and confront extremism.

They also expressed their keenness to continue the constructive dialogue and joint cooperation they started together recently, which has produced a historic document, the Human Fraternity Document, which was announced from Abu Dhabi in 2019.

The two sides added that the many challenges require strength and determination to bear hardships and difficulties, and that returning to the teachings of religions is the way for the world to escape from extremism, division and the tyranny of matter.

The Grand Imam and His Holiness Pope Francis praised the efforts and initiatives of the Higher Committee for Human Fraternity in activating and consolidating the values ​​of the Human Fraternity Document for coexistence among human beings.

On Monday, the Vatican hosted the Summit of Religious Leaders for Climate Change, entitled (Faith and Science), with the participation of religious leaders and scholars from around the world.

The summit sent a joint appeal to the participants of the twenty-sixth United Nations Climate Change Conference, to be held from 1 to 12 November in Glasgow, Scotland, to express their concerns and desires to assume greater responsibility towards the planet.

The appeal is also to stand in solidarity to reduce the negative effects of climate change on the planet, environment and the sustainability of its resources.