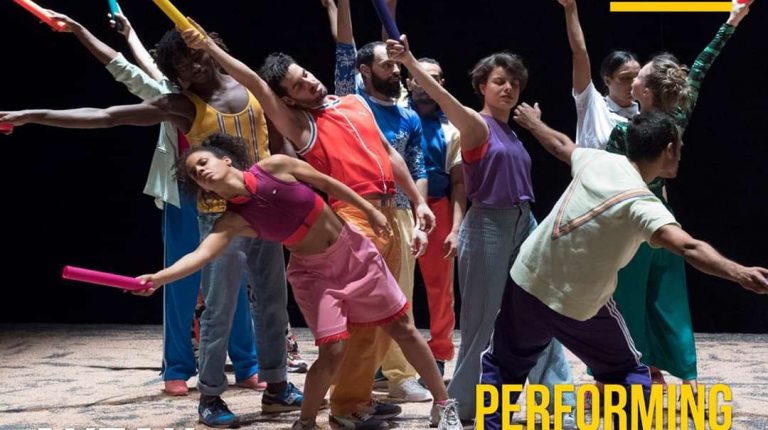 After a two-year absence, Downtown Contemporary Arts Festival (D-CAF) will bring back art to the stages and streets of Downtown Cairo, with groundbreaking works by creators hailing from every corner of the world. The festival will be running from 1 October until 22 October.

In keeping with its long-standing mission to showcase the city’s unparalleled heritage, D-CAF will spotlight a wide range of historical sites and vibrant new Downtown spaces.

The festival’s ninth edition will open with a banging music concert at the GrEEK Campus, featuring rappers from Egypt and the United States.

The once stoic building in Mohamed Mahmoud St., which housed the American University library for over 40 years, now boasts dozens of beautiful graffiti artworks dating back the revolution – a token of all the changes the city has undergone in the past decade. After ample renovations, the GrEEK campus is now home to Egypt’s first technology park, and regularly hosts outdoor film screenings, live music performances, and more.

Another returning staple of D-CAF is the Tahrir Cultural Center (TCC). It was established to revive the American University in Cairo (AUC)’s strong and important presence in the heart of Cairo. AUC has played a vibrant and vital role in enhancing the cultural, artistic, and public intellectual life of Egypt, the region, and the world from this central location for 100 years. Since the university moved to New Cairo ten years ago, this role has not been fulfilled to its true potential.

Since its establishment, TCC has come to fill this gap, and has been a proud partner of D-CAF. The cultural centre has greatly contributed to the Egyptian arts sector and carried AUC’s strong legacy in the Downtown cultural scene. This year, the AUC Falaki Theatre will host performances by artists hailing from Egypt, France, Tunisia, Morocco, Burkina Faso, and Chile.

This year, D-CAF’s venue selection once again strongly benefits from its fruitful partnership with Al Ismaelia for Real Estate Investment, who shares the festival’s dedication to securing Downtown’s position as the thriving cultural core of the city. Since its establishment in 2008, Al Ismaelia for Real Estate Investment has been on a journey to reclaim, restore, and revive Downtown Cairo’s unparalleled heritage by renovating the neighbourhood’s historical buildings into mixed use spaces suited for commercial, retail, entertainment and hospitality usage. Al Ismaelia has been a proud partner of D-CAF since the launch of the festival’s first edition in 2012.

In this ninth edition, three of Al Ismaelia’s venues will be hosting a spectacular selection of artworks as part of the festival.

D-CAF’s new media and visual arts programme will launch with the stunning photography of Egyptian artist Hana Gamal, showcased at the Adly Building Rooftop. This historical venue is a token to Downtown Cairo’s longstanding cultural centrality. First purchased by Kodak in 1924 and used to open the company’s second store worldwide; the building was acquired by Al Ismaelia for Real Estate Investment in 2008, who renovated the pedestrian passageway bordering either side of the building and repurposed its storefronts into exhibition spaces. The renovations were carried out in 2014 within the framework of D-CAF, with the purpose of accommodating a solo art show by Egyptian artist Hassan Khan, marking the inauguration of this new and vibrant art venue.

The programme will also bring its unique line-up of VR games, films, and interactive installations to two venues located above the historical Davies Bryan Building, better known as El Shorbagy. One of Downtown’s finest architectural jewels, the building overlooks three of its bustling streets: Adly, Mohamed Farid, and Abdel Khaleq Tharwat; with a rooftop offering unparalleled views of the city center. Al Ismaelia for Real Estate Investment acquired El Shorbagy in 2008, and began renovations in 2015 to restore the building to its timeless glory and establish the Violette and Victoria Rooftop Houses. This year, these two world-class exhibition spaces will showcase works from Hungary, Denmark, France, as well as an interactive installation curated by Egyptian VR expert Omar Kamel.

This edition of D-CAF will also see the birth of Orient Productions’ latest acquisition: the all-new Rawabet Art Space. Formerly known as Rawabet Theater, this emblematic venue first opened its doors to artists in 2006 and has since become a core pillar of the Egyptian independent theatre scene. After a long absence, Rawabet was recently taken over by Orient and revamped into a multipurpose, multidisciplinary art space. Orient has carried out extensive work to renovate the venue’s floors, walls, auditorium, and office spaces; so that they can accommodate a wider range of artistic activities. Rawabet can now seat a maximum of 280 attendees —a substantial increase from the former 120 person cap. Improvements have also been made to the sound-proofing facilities, electrical circuits, and anti-fire installation, to provide both performers and audiences with a world-class experience. This year, Rawabet Art Space will host talks, musical performances, and exhibitions by French, Syrian, Danish, and Egyptian creators.

Because D-CAF believes that art should not be confined to the walls of a gallery, the festival’s Urban Visions programme will take art to the streets and sidewalks of the capital. Two works conceived by French and Hungarian artists will invite audiences to explore Cairo’s unique urban fabric, and discover the city centre in a new light.