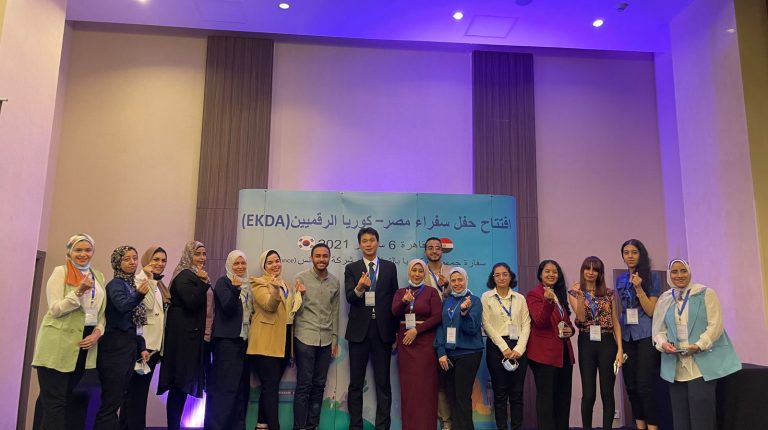 The Ambassador said EKDA will digitally promote the Egyptian people’s awareness and understanding of Korean culture and Egypt-Korea relations through social media networks.

Moreover, EKDA members will be invited to join the Embassy’s various online and offline events and serve as an advisory group for the Embassy’s public diplomacy activities.

During the ceremony of announcing EKDA, the digital ambassadors made a brief self introduction.

Ambassador Hong told Daily News Egypt that the selection process was very difficult as around 3,200 Egyptian people had applied for this honorary title to become a part of the Korean Embassy, of which 15 (13 females and 2 males) were finally selected through both online and offline processes, which shows Egyptians’ growing affection and interest in Korean culture.

During his speech in the ceremony, Ambassador Hong said, for instance, Samy Rashad is an Egyptian who lives in South Korea and promotes Egyptian culture for the Koreans, highlighting the importance of the relationship between Korea and Egypt.

He presented a clip released a few days ago by the Korean Foreign Ministry of an interview between the Ambassador and Samy Rashad.

Addressing the Egypt-Korea Digital Ambassadors, Ambassador Hong said, “You are here in Egypt, probably doing the same job, don’t feel stressed that you have to promote only Korean culture or Korea related things. We do want to listen to your opinions, whereas we do want to listen to your advice on how to follow Korean diplomacy here in Egypt, you will be our political policy advisors especially in terms of public diplomacy.”

He stressed the importance of the culture exchange between Egypt, and Korea stating that the digital ambassador role will be focused on connecting the hearts of the Koreans with the hearts of the Egyptian and to maintain the two way communication between Egypt, and Korea. Also he mentioned that the digital ambassadors will be the communication bridge between the Egyptians who love Korean culture and the Embassy in Egypt.

Ambassador Hong said that aside from the Egyptian Korean all-time great government-to-government cooperation, the two countries cannot take too much emphasis on the importance of public diplomacy in the sense that people-to-people exchange based on their mutual understanding is essential to make the bilateral relations sustainable.

In addition, Ambassador Hong also stressed that as every aspect of our lives are now getting more and more digitized especially due to the Covid-19, the role of Digital Ambassadors are more important than ever to creatively promote the image of Korea and Korean culture in the online space of Egypt.

He concluded his speech by thanking and appreciating the efforts of the digital ambassadors for their efforts in promoting the Korean culture in Egypt and presenting them certificates of appointment, encouraging the EKDA members to do their best to strengthen the two countries’ bilateral relations as the faces of the Korean Embassy.