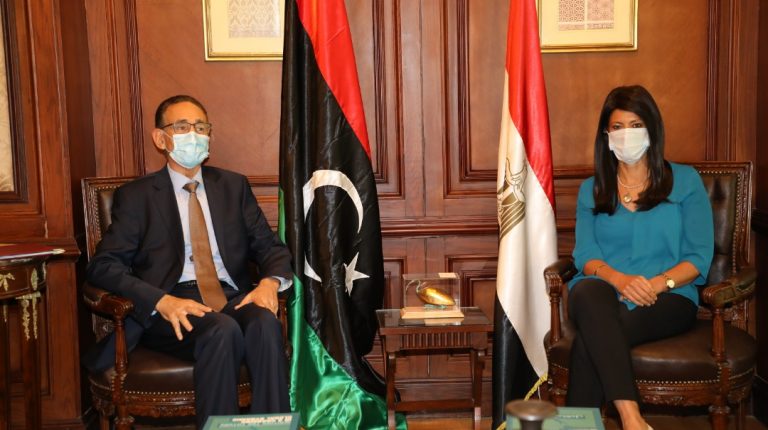 Rania Al-Mashat, Egypt’s Minister of International Cooperation, discussed with Mohamed Al-Hweij, Minister of Economy and Trade in the Government of National Unity in Libya, economic and technical cooperation between the two countries, in the presence of Salama Al-Ghwail, the Libyan Minister of State for Economic Affairs.

It comes within the Ministerial Preparatory Committee’s efforts; co-chaired by Al-Mashat and Al-Hweij, to prepare for the 11th session of the Egyptian-Libyan Joint Higher Committee.

The two ministers reviewed proposals for activating bilateral cooperation frameworks to instigate and maintain the new period of relations that shall perpetuate cooperation between the two countries. These endeavors contribute to building back better in Libya; benefiting from the great economic potentials both countries have; and capitalizing on the distinguished geographical proximity that paves the way for promising economic partnerships.

Al-Mashat stressed that the Ministry of International Cooperation seeks, through Joint Higher Committees, to strengthen and enhance bilateral and economic relations between Egypt and other countries, especially the neighboring Arab countries.

She added that such committees are eminently effective mechanisms for promoting economic diplomacy; and that the Ministry of International Cooperation enhances the Joint Committee through constant follow up on results and coordination with all parties to streamline the implementation of the Committee’s decisions and maximize bilateral cooperation with Libya across all fields.

She emphasized the long-standing relations between Egypt and Libya, noting the great interest that President Abdel Fattah Al-Sisi attaches to the stability of Libya and referring to the presidential directives to the government to provide all aspects of support and assistance to Libya.

Al-Mashat further affirmed the importance of motivating businessmen from both sides to implement joint projects; with both governments providing the needed circumstances for these projects to succeed.

The Minister stated that the Egyptian-Libyan relations come within the framework of the Egyptian-Libyan Higher Committee that held 10 consecutive sessions; headed by both countries’ prime ministers. Several joint technical committees across various fields are held within the framework of the joint Higher Committee; with the former periodically reporting to the latter.

Al-Mashat further mentioned that the joint economic cooperation between Egypt and Libya is regulated by multiple legal frameworks; as both countries have signed about 60 agreements across economic and technical fields. The Minister also noted that it is of profound importance to revive and resume the joint Higher Committee, which has not been held since 2009.

Both Ministers discussed the proposed documents, so as to finalize sad activate them; concluding the work of the Higher Committee to be held in Cairo under the supervision of Egypt’s Prime Minister, Mostafa Madbouly and Libya’s Prime Minister, Abdul Hamid Dbeibeh.

Al-Mashat and Al-Hweij emphasized their keenness on constantly coordinating both countries’ efforts towards enhancing joint cooperation and combating any challenges that may hinder the implementation of the projects.

For their part, Al-Hweij and Al-Ghwai, expressed their gratitude and appreciation for Egypt’s support to Libya on all levels. They also expressed their will to deepen the bilateral relations between both countries, in line with the long historic relations that tie them.

The Libyan Ministers also referred to Libya’s keenness on benefiting from Egypt’s development experience and expertise for Libya to follow suit in reconstructing the country; including the implementation of several national projects.

Mostafa Madbouly has officially visited Libya, chairing a High-Level Ministerial delegation on April 20, where both sides agreed on reactivating the joint Higher Committee’s sessions and re-building the joint relations across various sectors, in addition to signing 11 cooperation protocols across various sectors such as transportation, infrastructure, health, labor, investment, electricity, and communications.