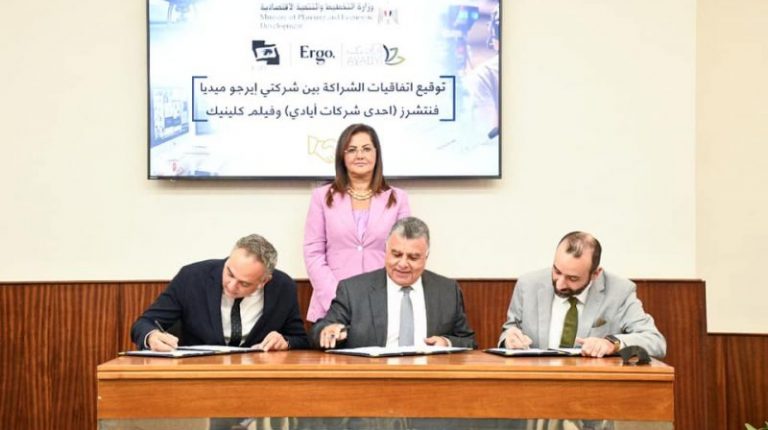 The Ayady for Investment and Development’s Ergo Media Ventures has signed contracts to invest in Film Clinic to expand the latter’s activities of development, production, and distribution of Egyptian films for regional and international audiences.

Hala El-Said, Minister of Planning and Economic Development and Chairperson of the National Investment Bank (NIB), witnessed the signing of the investment contracts. The agreements were signed by Chairperson of Ayady for Investment and Development, Osama Saleh; Founder of Film Clinic, Mohamed Hefzy; and Co-Founder of one of Film Clinic’s companies, Amr Salama, according to a statement on Tuesday.

Ergo, founded by Ayady in 2018, was managed by NI Capital, the investment arm of NIB.

The partnership reflects the keenness of the state to cooperate with the private sector to maximize their presence and competitiveness in the local and regional markets, in addition to supporting Film Clinic in its quest to expand its activities in development, production, and distribution of motion pictures.

El-Said stated that the establishment of Ergo and this deal reflected the state’s commitment to support the media industry and artistic production and to transform ideas into influential investment opportunities that contribute to reshaping the media and artistic landscape.

She added, “Through this deal, we seek to enhance the contribution of the artistic production industry to economic growth, increase Egyptian exports of content, and enhance investment in the Egyptian state’s soft powers, which carry many investment opportunities and possess all the ingredients for success.”

For his part, Osama Saleh said that Ayady’s investment in Ergo reflects the former’s desire to invest in various fields, whether traditional or other sectors that have rarely seen investments by financial and investment institutions, which encourages investment in this vital and promising sector in the future. Saleh also stressed that investing in and developing the emerging digital distribution channels works to deliver content to the Arab region and enhances Egypt’s media position and restores its leading position.

CEO and Managing Director of NI Capital Mohamed Metwallysaid, “We hope that Ergo’s investment in Film Clinic will help its transformation. What is happening now in the distribution of film content from traditional cinemas to international, regional and local platforms that carry the content of Egyptian film production to all viewers of Arab films wherever they are around the world, which will maximize the impact of Egypt’s soft power and the return on investment in film production and reduce the volume of traditional risks related to with it.”

Gamal Gamea, investment manager at Ergo, stated that this deal is the first for the company among a number of investment opportunities that are now being studied in various sectors of the media industry. He added, “We have worked very hard in the past two years to identify and evaluate a number of investment opportunities in the media industry as we believe that it is a promising sector that can achieve rewarding returns, especially in light of digitization, the emergence of new platforms and media channels, and the consequences of the Coronavirus pandemic.” He added that these changes represent a golden opportunity for the media industry in Egypt to adapt to it and confirm Egypt’s leadership in the media industry at home. It has a strong infrastructure and multiple talents in various technical fields.”