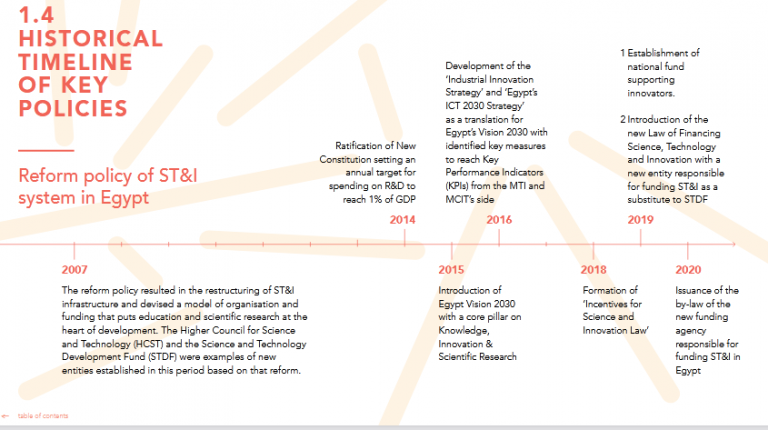 The Central Bank of Egypt (CBE) is leading the way in Egypt’s efforts to boost entrepreneurship, with the NilePreneurs initiative which aims at raising entrepreneurship awareness among the country’s youth.

A report by the Global Innovation Policy Accelerator has highlighted key initiatives aimed at entrepreneurship in Egypt, including the Nilepreneurs. It noted that, despite the challenges, Egypt is striving towards formulating a comprehensive national innovation system.

The initiative was launched in 2017 by the Nile University, following a five-year-agreement with the CBE, in collaboration with the Micro, Small, and Medium Enterprises Development Agency (MSMEDA).

Also involved are: the Ministry of Planning and Economic Development; the Academy of Scientific Research and Technology (ASRT); local banks; the Egyptian Banking Institute (EBI), the CBE’s educational arm; and local and international entities and donors.

The CBE is looking to turn NilePreneurs into a national initiative that adopts international best-practices and progressive scientific methodologies.

The initiative provides the necessary technical equipment and engineering consultancy for innovators through the design house located at the Nile University. This will help them reach a prototype in accordance with the standard operating procedures for product development.

Similar models to the design house are to be established at three other universities. A cooperation protocol has been signed between NilePreneurs and the Rowad 2030 project, implemented by the Ministry of Planning and Economic Development.

Under the protocol, the ministry will finance the “Micro Factory” programme for small-sized products ranging from 50 to 100 units, whilst supporting products from the ideation phase to the final stage of development.

“With a relatively young, tech-savvy population, with more than 60% of the population under the age of 30, a growing economy (5.7 % GDP annual growth rate in 2018), a vibrant entrepreneurship scene, and an increasingly proven interest from international corporates in the Egyptian market, as well as different international organisations and donor agencies, the Egyptian innovation and technology ecosystem has seen significant positive development during the past decade,” the report said.

This has been reflected in Egypt’s Vision 2030, and in the constitution adopted in 2014.

Accordingly, science, technology and innovation (ST&I) is now considered a main pillar in creating a competitive economy, and a society based on knowledge and innovation by 2030, the report added.

In line with this vision, relevant governmental entities have designed their own ST&I relevant strategies.

The report also talked about the Research, Development, and Innovation (RDI) programme, adding that the Ministry of Higher Education and Scientific Research launched this project with a grant of £9m. This was implemented in collaboration with the European Commission in October 2007.

The RDI programme’s overall objective has been to contribute to enhancing Egypt’s economic growth and international competitiveness, through improving its research, development, and innovation performance.

The programme had three specific objectives, namely: strengthening the link between the research and development (R&D) sector and industry while enhancing the innovation and technology transfer culture; evaluating the Egyptian Science, Research and Technology Landscape for the Design of the Egyptian Innovation Policy and Strategy; and facilitating Egyptian participation in the European Research Area.

“At the same time, the Ministry of Trade and Industry’s Industrial Innovation Strategy focuses on promoting an innovation culture, incentivising market-oriented research and development, and building strong links between academia and industry through creating clusters among companies and research institutes, and enabling companies to bring innovations to the market,” the report added, “Egypt’s Ministry of Communications and Information Technology has also been working to foster ICT-based innovation through enhancing youth skills and providing much-needed support to young tech entrepreneurs.”

The Ministry of Higher Education and Scientific Research has adopted its own National ST&I Strategy (ST&I 2030), focusing on two main pillars. This includes creating an enabling and supportive environment for science, technology and innovation. It also includes knowledge transfer and the localisation of technology, to contribute to economic and community development.

The report said that such a myriad of initiatives have enriched the national innovation system. It also said that, despite such progress in terms of activities and legislation encouraging entrepreneurship, research and development, there are still gaps in the coordination of such activities. There is also a lack of ability to measure their real impact on the economy.

The report analysed the strengths in Egypt, including a well-established set of institutions with a focus on scientific research and, to a lesser extent, on innovation.

It pointed to a dynamic recent wave of regulatory and institutional reforms, the existence of business associations supporting young entrepreneurs and business owners, and diversified mechanisms of public funding on R&D.

At the same time, Egypt also boasts a good active research base with high productivity, a stable macroeconomic situation, and a supportive entrepreneurship ecosystem.

Meanwhile, the weaknesses in Egypt include researchers’ work not always being aligned with national need, and not being productive enough.

The country also faces a misalignment between scientific productivity and industrial needs, and a lack of scaling up potential for startups. There is an additional institutional gap in the effectiveness and enforcement of the national strategy for research and innovation.

Opinion|A time to take risks: Why now is the right moment to explore innovations

After a year of NilePreneurs initiative, what accomplished so far?