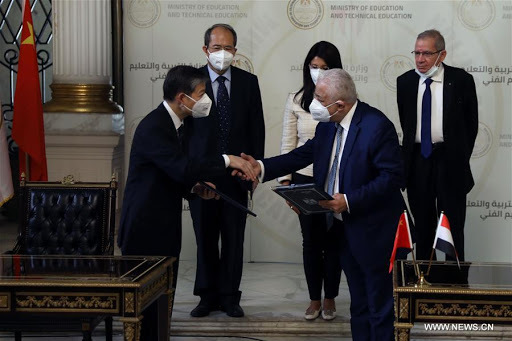 Since Egypt and China formalised diplomatic relations in May 1956, the two countries have witnessed positive development in all fields.

Over the course of 64 years, these relations have culminated in distinct cultural exchanges between the two peoples, which have stemmed from the two countries’ common features of civilisation.

The Egyptian-Chinese cultural exchange has become one of the most important aspects of the relations bringing the two countries together, to create understanding and communication in many cultural fields.

The two parties have, over the years, signed several joint cooperation protocols and agreements covering culture, tourism and education.

Accordingly, the first Egyptian educational and cultural mission arrived in China in 1956, and in the same year the “Egyptian-Chinese Friendship Association” was established.

The 21st Century has so far witnessed the implementation of several executive programmes for joint cultural cooperation between Egypt and China. This has covered the field of art, culture, antiquities and tourism, and has seen experts in conservation conduct exchange visits.

Exhibitions of Egyptian antiquities have also been held in China, in addition to a cultural week focusing on Egypt’s history at the World Garden in the Chinese capital, Beijing. These have taken place as part of the two sides’ agreement to include Egypt on the list of best tourist destinations for Chinese citizens.

Moreover, Chinese artists have also performed Egyptian folk songs and dances, with Egypt participating in the International Children’s Culture and Art Festival in Tianjin and Ancient Treasures of Egypt exhibition in Beijing and Shanghai.

Among the initiatives launched by the Chinese Cultural Center in Cairo is an intensive campaign to spread awareness on the novel coronavirus (COVID-19). The awareness campaign is aimed at helping Egyptians avoid infection by educating them on China’s experience in overcoming the pandemic.

In early September, Egypt and China signed a cooperation protocol for the Chinese language to be taught as a second optional foreign language in Egypt’s schools.

The protocol was signed by Egypt’s Minister of Education Tarek Shawky and China’s Ambassador to Cairo Liao Liqiang.

During the signing ceremony, Shawky said, “Egypt is keen to benefit from the unique Chinese experience in economic development as well as other fields.”

“Today’s agreement represents an illuminating image of the distinguished and fruitful relations between the two friendly countries, which we always strive to strengthen and support by all means to achieve the desired goals,” he added.

According to the Chinese Embassy in Cairo, there are two Confucius Institutes in Egypt, located at Cairo University and the Suez Canal University, in addition to three independent Confucius classrooms.

A total of 16 universities have also either established Chinese language departments or are teaching the language as part of their curriculums.

The Chinese government has also built two schools as part of an educational aid programme for Egypt.

The Luban workshop is the first project representing international cooperation on vocational training supported by China’s Tianjin Municipality. It aims to improve the academic education of top technical talents, whilst serving the local economy and society via vocational training.

In 2019, China provided more than 300 scholarships for Egyptian nationals to finish Masters and PhD programmes, according to the Chinese Embassy in Cairo.

“We have given each other’s international students meticulous care and exchanged experiences in resuming classes,” China’s Ambassador to Cairo, Liao Liqiang, said during the signing ceremony, “China has also donated 300,000 masks and other anti-virus materials to the Egyptian Ministry of Education and Al-Azhar University.”

He said that the integration of Chinese teaching into the Egyptian national education system reflects the vision of the Egyptian government.

“Similarly, China will further open up education to the outside world to facilitate people-to-people exchanges between the two countries, and pave the way for building a China-Egypt community with a shared future,” Liqiang added.

The ambassador said that his country is willing to work with Egypt on the agreement’s step-by-step implementation, whilst also strengthening cooperation in improving the proficiency of teachers. The programme will also enrich teaching materials, optimise teaching methods, and compile the relevant syllabus.

Additionally, the Egyptian Cultural Office in China announced the launch of the “Study in Egypt” initiative, in cooperation with China’s Ministry of Education. The initiative was launched under the auspices of Egypt’s Ambassador in Beijing Mohamed Al-Badri.

Egypt, China to advance cooperation in combatting COVID-19, vaccine in 2021

What has happened in Egypt since discovering 1st COVID-19 case?