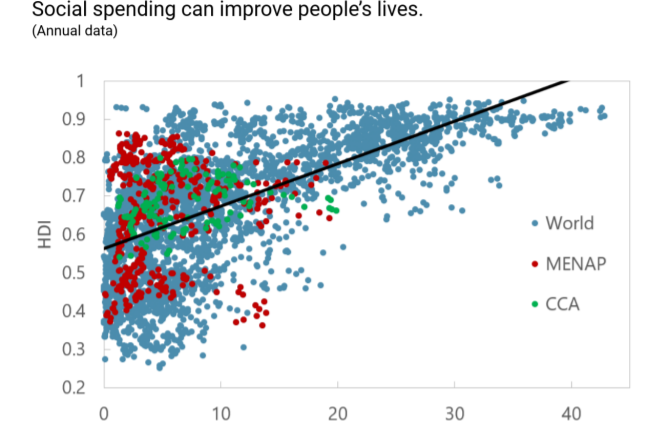 The Egyptian government has allocated a total of $6.13bn to alleviate the impacts of the novel coronavirus (COVID-19) pandemic.

Of this amount, about $528m has been allocated to support the country’s healthcare sector, by providing immediate medical supplies and disbursing bonuses to medical staff working on the frontlines of the crisis.

Monthly grants for three months totalling $93 (equivalent to EGP 1,500) have also been extended to day-labourers and irregular workers, and pensions increased by 14%. Targeted cash transfers were also set up to reach vulnerable families.

The remarks were published in the IMF’s latest report entitled “Social Spending for Inclusive Growth in the Middle East and Central Asia”.

Last August, Finance Minister , Mohamed Maait announced that about EGP 65 bn had been spent out of the EGP100 bn that President Abdel Fattah El-Sisi directed to allocate to confront the Corona crisis.

IMF suggests that a 10% increase in social spending per capita could close 20%–65% of the Human Development Index (HDI) gap between countries in the Middle East and Central Asia region (MCD) and their global peers.

Education, health, and poverty indicators in the MCD have improved substantially over the past two decades. The rate of progress, however, has slowed, and these indicators remain weaker than among global peers.

The level of social spending is also lower, though to a lesser degree, with the novel coronavirus (COVID-19) pandemic bringing the challenge of improving socioeconomic outcomes into stark relief.

“Raising the level of social spending and improving the efficiency of that spending, including getting more out from what is put in, can each play an important role,” the report said, “The latter critically depends on strengthening institutions and improving governance and transparency.”

The report mentioned that the socioeconomic outcomes are weaker in the MCD region than in other regions. It explained that many countries in the region face pressing issues, such as infant mortality and poor educational attainment.

While there is significant cross-country diversity, social spending in the region is generally lower than in other parts of the world.

“Governments in the MCD region devote 10.4% of GDP, on average, to social spending, compared to a global EM average of 14.2%,” the IMF said in the report.

The additional spending needed to reach the UN’s sustainable development goals (SDGs) underscores the scale of the challenges faced by the region. The median country in the MCD region needs to spend an additional 5.3% of GDP per year by 2030 to achieve five critical SDGs covering human, social, and physical capital. Many of these countries would need even more spending.

The fund said that the gap in outcomes between the region’s countries and global comparators is larger than that in spending. This suggests that the efficiency of social spending may need to be enhanced as well as the amount.

The IMF’s empirical findings suggest that increasing the efficiency of spending in the region to the global frontier could, without any increase in outlays, eliminate one-third of the HDI gap.

Stronger transparency and accountability over the use of public resources minimises wasteful spending and promotes efficiency.

“The region can build on its initial response to the pandemic,” the IMF said, “Most Middle East and Central Asian countries were able to quickly mobilise resources for additional health care and social protection outlays in response to the COVID-19 crisis.”

Talking about Egypt’s key social spending policies in response to the global pandemic, the IMF said that the government has allocated a total of $6.13bn to alleviate the impact of the pandemic. Approximately $528m has been allocated to support the healthcare sector, by providing immediate medical supplies and disbursing bonuses to medical staff working on the frontline of the COVID-19 crisis.

Monthly grants for three months totalling $93 (equivalent to EGP 1,500) has been extended to day-labourers and irregular workers, and pensions increased by 14%. Targeted cash transfers were also set up to reach vulnerable families.

Czech Republic to resume tourism flights to Egypt from October

Egyptian government to pay exporters’ dues in cash at 15% discount