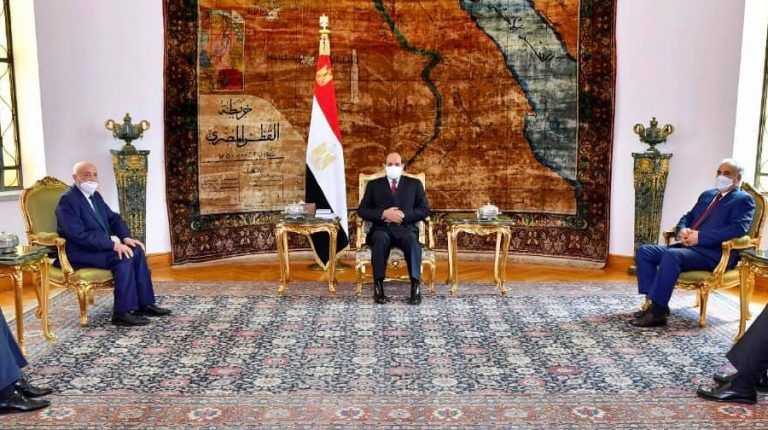 The high-level Libyan delegation arrived at the presidential palace in Cairo for a meeting with the Egyptian President, which was also attended by the head of Egypt’s General Intelligence Services (GIS) Abbas Kamel.

In a statement by Presidency Spokesperson Bassam Rady, the president was briefed on developments in Libya, and the efforts by all parties in the country to implement a nationwide ceasefire.

During the meeting, the Libyan representatives also reviewed the efforts to advance the peace process, under the United Nations’ (UN) auspices.

According to the presidency statement, the two sides will discuss the latest developments in Libya. This focused particularly on the latest round of talks between the eastern-based House of Representatives and the UN-recognised Government of National Accord (GNA), which aim to reach a political settlement.

Saleh has called for the restructuring of the current executive authority which was set up following the 2015 political agreement that was signed in the Moroccan city of Skhirat. This may also affect the selection of its members to ensure the representation of Libya’s three historical regions of Barqa (Cyrenaica), Tripoli and Fezzan.

Haftar has said the 2015 political agreement will be dropped and he will accept the leadership through a “mandate from the people”.

Libyan writer and political researcher, Abdul Basit Hamel, said that the high-level visit to Cairo comes from a common framework between Libya’s House of Representatives and the country’s leadership.

Hamel added that the visit will renew the vision for an agreement in Libya, which will help in changing the presidency council, whilst also forming an independent government, and speeding up the elections process.

He added that there are no major differences between Saleh and Haftar, but that any differences that have been highlighted are ”just image drawn by Muslim Brotherhood”.

Egypt announced, in early June, the formalisation of the Cairo Declaration initiative, which posits an entirely Libyan resolution as a basis for resolving the country’s conflict. The initiative drew on earlier international efforts, including the Berlin Conference, to create a workable solution.

President Al-Sisi confirmed, on Tuesday, that any crossing of the red line in the area surrounding Sirte and Jufra will face the full repercussions of Egypt defending its national security and the safety of its people.

Al-Sisi has told the UN General Assembly that Egypt is committed to helping the Libyans “rid their country of terrorist organisations and militias, and to put an end to the flagrant interference of some regional parties that bring foreign fighters to Libya to realise the known ambitions and foregone colonial illusion.”

He added, “Egypt adheres to the path of a political settlement in Libya, as the country’s crisis affects the security of its neighbours, and any crossing of the red line in Sirte and Jufra that Egypt identifies will be addressed.”

Al-Sisi said that countries that violate international decisions should be held accountable and that Egypt is keen to establish international peace and security. He added that Egypt calls for the adoption of an approach that achieves security and stability in the region.

Significant progress made as Libyan talks in Hurghada conclude: UNSML