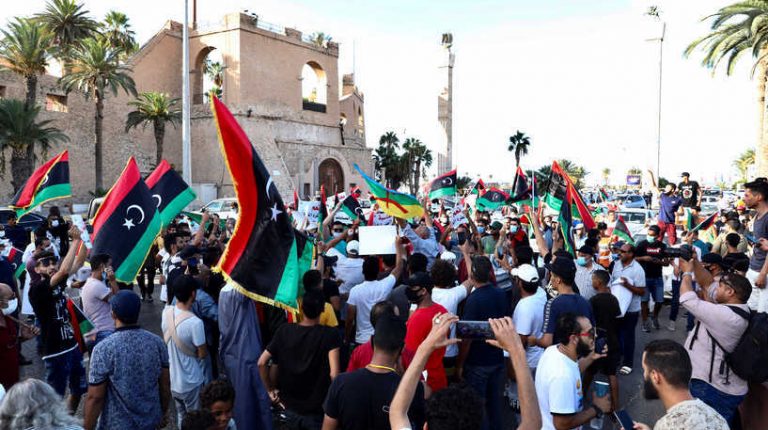 Libya’s eastern-based government, headed by Abdullah Al-Thani, submitted its resignation to the country’s House of Representatives on Sunday, following nationwide protests that erupted against deteriorated living conditions and corruption.

The protests have been ongoing for several days in the northern city of Benghazi, where dozens of Libyans took to the streets and set fire to government headquarters, the Reuters news agency reported.

The demonstrations extended to other cities, such as the Libyan Arab Armed Forces (LAAF) stronghold of Al-Marj, Al Bayda, Sabha, and Zliten, according to local media and Reuters.

LAAF Spokesperson, Ahmed Al-Mesmari, said, on Sunday, that the army supports “peaceful demonstrations that called for improving the living conditions and combating corruption”.

Also on Sunday, the UN Support Mission in Libya (UNSMIL) expressed its “grave concern regarding reports that one civilian was killed, three injured, and a number of other demonstrators arrested on 12 September, following the reported excessive use of force by eastern authorities against peaceful demonstrators in the city of Al-Marj”.

The UNSMIL called for “a thorough and immediate investigation into these incidents and for the speedy release of all those arbitrarily arrested and detained”.

Meanwhile, the UNSMIL said that the protests “underscore the urgent need to lift the oil blockade and return to a full and inclusive political process that will meet the aspirations of the Libyan people for representative government, dignity, and peace”.

Earlier on Saturday, the US embassy in Libya said that the LAAF, led by Commander Khalifa Haftar, “conveyed to the US government the personal commitment of General Haftar to allow the full reopening of the energy sector no later than September 12”.

The protests came three weeks after Fayez Al-Sarraj, Head of the Government of National Accord (GNA), and Libyan Parliamentary Speaker Aguila Saleh announced a ceasefire in Libya, and called for parliamentary and presidential elections.

The protests follow similar demonstrations that erupted in August in several cities western Libya, including the GNA base of Tripoli, and Misrata. The demonstrators were angry at the level of corruption and poor public serves, frequent power and water cuts, and fuel shortages that have been plaguing the country in recent times.

Could the death sentence be a deterrent for terrorists in Egypt?

Syria to return to Arab League once it overcomes its current crisis: Shoukry