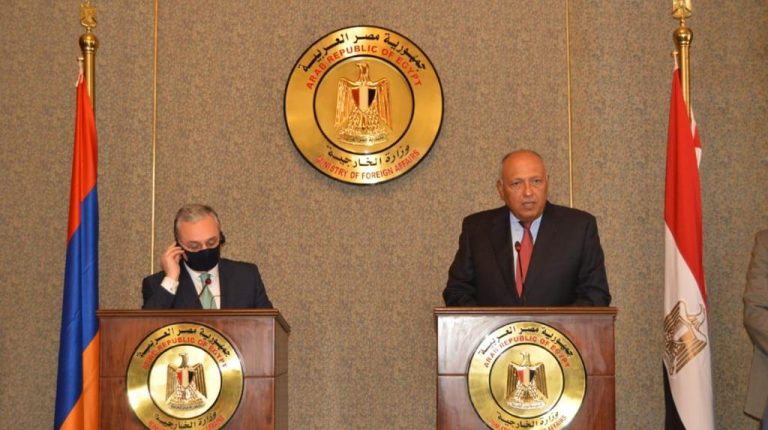 Armenia’s Minister of Foreign Affairs Zohrab Mnatsakanyan has said that his country “values Egypt’s role in bringing peace to the region, especially in Libya.”

Mnatsakanyan’s remarks came during a press conference on Sunday, held in conjunction with Egypt’s Minister of Foreign Affairs Sameh Shoukry.

The Armenian minister added that Turkey has taken a unilateral and aggressive approach against the Armenian people, which can be seen in the recent Turkish actions in the region.

“We see that there is a military escalation that they are trying to do, and they are using mercenaries to transfer them to Azerbaijan, which threatens the existence of any peaceful solution, because it is a force imposed that destabilises stability and security,” Mnatsakanyan added.

During a meeting, the two ministers exchanged views on the steps being undertaken at national level to address the challenges posed by the novel coronavirus (COVID-19) pandemic. Egypt’s President Abdel Fattah Al-Sisi was scheduled to visit Armenia this year, but the visit has been postponed due to the pandemic.

Mnatsakanyan added that Egypt plays an important and pivotal country in the Middle East, whilst stressing his country’s support for the Egyptian role in the region.

The Armenian minister stressed that any attempt to destabilise the region, especially through the transfer of terrorists to some areas, is completely unacceptable.

During the press conference, Shoukry added that Egypt supports the UN supported Libyan political solution, as it will lead to a stable government.

He added that Egypt also supports all efforts made to solve the Libyan crisis, whilst stressing that external interventions are only serving expansionist policies with ulterior motives in Libya. The Egyptian minister added that these policies do not serve to solve the crisis, but rather support radical ideologies that harm innocent civilians.

Commending the dynamics of dialogue between Armenia and Egypt, the foreign ministers reiterated their mutual willingness to continue steps aimed at the further expansion of the two countries’ bilateral agenda.

“We always aim for mutual communication, and we are proud of our common relations with Egypt, and we always strive to enhance joint cooperation,” Mnatsakanyan added.

Among other directions of collaboration, the sides particularly emphasised the importance of steps to fully utilise the potential of cooperation in a range of sectors. These include pharmaceuticals, alternative energy, information technologies, innovation, agriculture, and other spheres.

During the meeting, Mnatsakanyan and Shoukry exchanged views on the regional situation, as well as on a wide range of issues of mutual interest and importance. They also reaffirmed the two countries’ readiness to closely cooperate, based on their historically traditional friendship.

Political solutions must be sought in Eastern Mediterranean: Shoukry

Islamists vs. Military: Turkey’s Recent History and Egypt’s Near Future