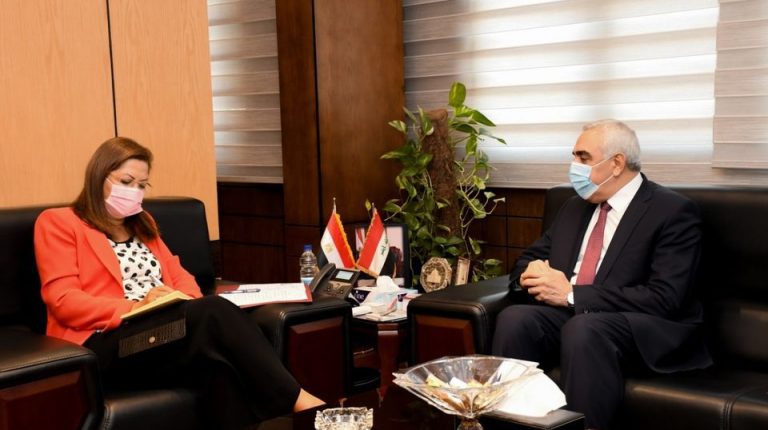 During the meeting, El-Said pointed out the strategic importance of relations between Egypt and Iraq, and the enhancement witnessed in economic, trade, and investment cooperation.

El-Said highlighted the trilateral measures put in place between Egypt, Jordan, and Iraq, to increase trade and investment rates during the coming period. The measures were started about two months after the tripartite presidential summit, held in Cairo in March 2019.

The minister also pointed to the agreement undertaken by the three countries’ Ministers of Trade and Industry to develop new plans and mechanisms to stimulate economic cooperation. This comes in addition to the joint trade exchange, to achieve integration according to a specific timetable, and with private sector participation in Egypt, Jordan, and Iraq.

Moreover, El-Said highlighted the draft Memorandum of Understanding (MoU) between Egypt and Iraq, in the fields of policy-making and international and regional cooperation. The MoU is expected to be signed during the upcoming work of the Egyptian-Iraqi Joint Committee.

During the meeting, the minister asserted that the economic and trade relations between the two countries are characterised by the breadth of their horizons and the multiplicity of their fields.

She also pointed to the possibilities of their future development that will see the economies of both countries diversified.

For his part, Al-Dulaimi, Ambassador and permanent representative of Iraq to the Arab League, confirmed during the meeting that Iraq has now become an attractive arena for foreign companies and investments in various sectors. The positive announcement comes on the back of the final victory over ISIS, Iraq’s stable security situation, and the political openness to the country’s regional and international surroundings.

Will Al-Sisi’s visit write a new chapter in Egyptian-American relations?

Frustration across Shi’a communities after execution of Al-Nimr