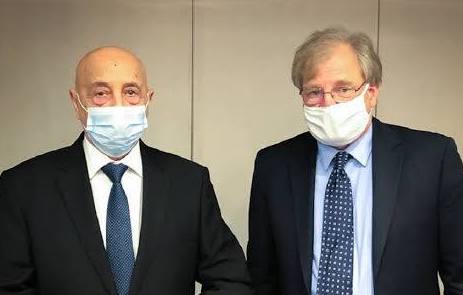 Speaker of the Libyan House of Representatives, Aguila Saleh, and US Ambassador to Libya, Richard Norland, met in Cairo on Monday to discuss the recent developments in Libya.

During the meeting, the officials also sought to discuss ways of reaching a solution to the Libyan conflict based on the Cairo Declaration and the outcomes of the Berlin Conference. They also tackled the Turkish intervention in Libya.

Saleh arrived in Cairo on Sunday to resume a series of international and regional meetings, as part of efforts aimed to resolve the Libyan crisis.

“The meeting discussed the steps taken to move forward with work on the initiative of Aguila Saleh, which culminated in the Cairo Declaration according to the outcomes of the Berlin Conference,” Hamid Al-Safi, Media Adviser to Saleh, said, according to the Libyan News Agency in Benghazi.

The meeting also reached an agreement to continue with the cease-fire, and reopen talks to end the crisis in Libya.

Norland asserted the necessity of stopping the fighting in Libya and that there is no military solution to the crisis. He was quoted by Egyptian newspaper Al-Ahram as saying Washington aims to “get forces to pull back and find some sort of neutral security arrangement” for the northern Libyan town of Sirte.

He revealed that one of the ideas suggested during talks involved the establishment of a demilitarised zone around Sirte.

The ambassador wants the Russians to be involved in a “productive way” instead of supporting armed groups. He also pointed out that only international courts can decide on the issue of Eastern Mediterranean cooperation between Turkey and the Government of National Accord (GNA).

Early in June, Saleh visited Cairo where he met with Egypt’s President Abdel Fattah Al-Sisi and Head of the Libyan Arab Armed Forces (LAAF), Commander Khalifa Haftar. The meeting ended in the announcement of a political initiative to solve the Libyan crisis, which was called the Cairo Declaration.