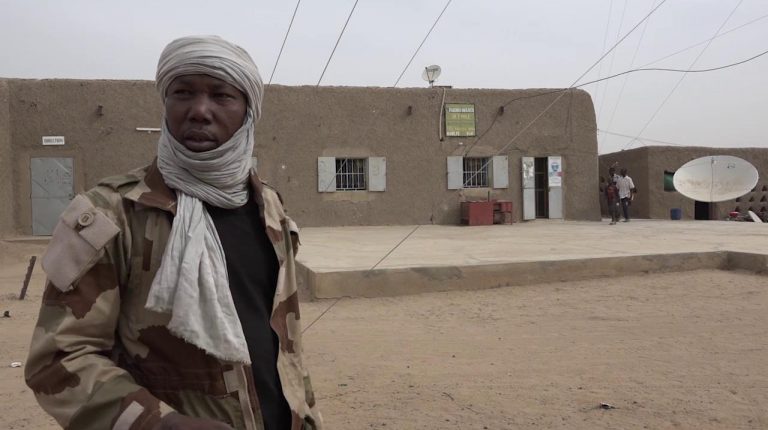 “By Your Call Mali” chanted dozens of locals in the city of Gao in northern Mali as they prepared to stage night patrols to defy the rule of the jihadist groups who took control of the city after they defeated the separatists. Kassim Sanogo, in his documentary film Gao, The Resistance of a People, visits Gao and meets with the people who participated in the independence of the city from the ‘occupation’ of the jihadists.

Before the film credits, the director gives a context by introducing the conflicting sides in the civil war, which a great chapter of it concluded when the jihadists drove the rebels outside of Gao. After the rebels established their power in Gao, the mistreatment and the radical approach of the jihadists started to alienate the local community, until they started a struggle for liberation. The militias which were found to take on the jihadists were not professional soldiers. Nevertheless, he interviews mundane locals, men, women, and young people who felt that their previous alliance with the Islamists was not working.

The interviews that Sanogo conducts are very similar to any interviews done in any area where radical Islamists have passed: banning women from going out, forcing a certain dress code, applying laws that date back to the 7th century, or attempting to destroy cultural heritage, and in this sense the film is relevant to an international audience.

Sanogo visits Gao to see what the reason for the rebellion was. He interviews several individuals who discuss the imposition of Islamic Sharia Law on people and on women. He then starts to meet with the men and women who participate in patrols which were able to drive away the jihadists from Gao.

In the film, it is clear that full agency is given to the people, where they admit that, at first, they sided with the Islamists, but then they started to become alienated from them, which drove them to rebel. Hence the people here are the writers of their own history, and Sanago is only a tool to document this. His film, which is 54 minutes long, documents this resistance by the population of Gao.

Gao, The Resistance of a People, does not fall into the trap of focusing on what happened and ignoring what can possibly take place in the future, so he goes to meet the elder’s council which is now in control of the city and is its decision-making body.

The film ought to act as facilitator of national dialogue between north and south Mali as both know the history of the war-torn country, but for an international audience more context is needed.

However, the documentary is very nationalistic, and includes copious rhetoric about patriotism, as well as argues that all people in northern Mali are the same regarding their political sensibilities and their material interests and agendas–which is problematic. The documentary is very enriching when it comes to explaining what happened during the conflict, but does not give context to what is the origin behind this conflict, regarding the interests of different classes, disputes among Islamist groups following the Arab Spring, or the role, or lack thereof, of southern Mali, and finally the position of the west from all of this. The last point is crucial as Mali was colonialised by France and now around 4,500 French troops are coming as ‘saviours’ to help the locals.

Having said that, the film is important because it tells the story of people who, voluntarily, take to the streets to protect their interests. Yes, nationalism is there, but it is still a story that celebrates human solidarity, and also because violence by jihadist groups has worsened almost every year since it first exploded in 2012, when Islamists and allied Tuareg rebels took over the north and advanced toward the capital Bamako.

Topics: Documentary Film gao The Resistance of a People

Forgiveness: The Secret of Peace