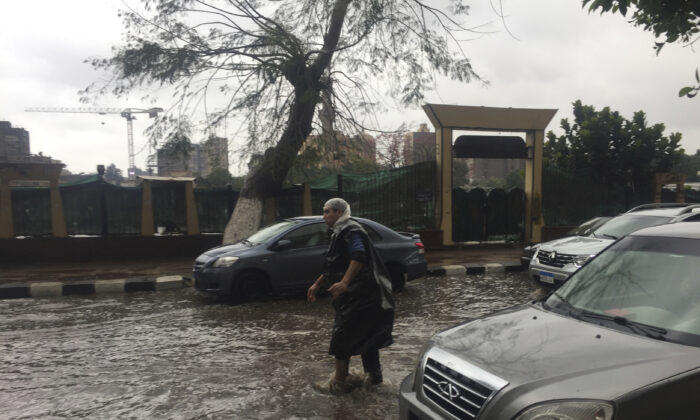 The Minister of Defense and Military Production ordered the Armed Forces Engineering Authority to assist state agencies in mitigating the effects of the devastating storm that hit the country in the past few days.

This comes under the directives of President Abdel Fattah Al-Sisi to the Egyptian people in the most affected areas.

Around 64 sewage vehicles were deployed in several regions, including Heliopolis, Autostrad Road, Al-Orouba Tunnel in Salah Salem, the Suez Road, and the entrances to Rehab cities and Madienty, according to a three-minute video released by army spokesperson Tamer Refaie

The Supply Authority of the Armed Forces provided assistance to the affected people, providing blankets and food to 5,000 affected families in Giza districts and Helwan.

Members of the Engineering Authority of the Armed Forces have also paid for 34 pieces of engineering equipment in El-Desmy village and El-Saf Center in Giza, to rehabilitate one of the collapsed bridges in the area, as well as to pump water.

“This comes as a result of the social responsibility of the armed forces to reduce the burden on the shoulders of citizens and the continuation of its humanitarian efforts in providing urgent support and assistance to citizens and alleviate the effects of the crisis they were exposed to, especially in the most affected areas” according to the spokesperson.

Late Sunday, Bassam Radi, spokesperson for the Presidency, praised state institutions and citizens for dealing with the wave of bad weather that the country witnessed during the past few days.

He said in a televised interview, that “this was not the first time that Egypt was exposed to awave of bad weather this year, as there was a wave in the beginning of winter, which we came out of with many lessons”.

“These lessons will be taken, as work is underway to find a fundamental solution to the problem of water gathering in some areas, such as Fifth Settlement and Sixth of October,” he said.

Radi also said that “the meteorological agency succeeded in accurately forecasting the state of weather conditions, which was reflected positively on the interaction of government agencies,” describing this handling as excellent.

Entire governorates witnessed a wave of inclement weather, which began last Thursday and continued until Saturday, accompanied by heavy rains that reached the level of torrential downpour in many areas which left 21 dead.

Day off Thursday due to inclement weather in Egypt : Government