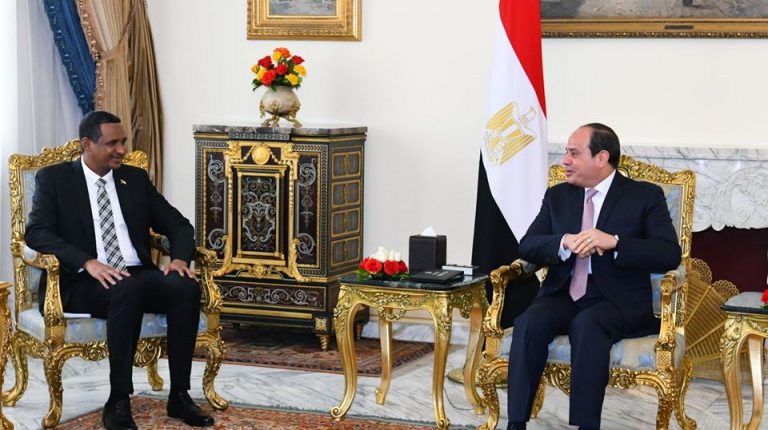 Al-Sisi and Dagalo discussed regional issues of common interest and in particular, the recent developments of the Grand Ethiopian Renaissance Dam (GERD) in the light of the US-brokered agreement over the filling and the operating of the dam, which Egypt initiated last month, the statement added.

The pair also agreed on enhancing bilateral cooperation, as Al-Sisi voiced his support to Sudan in this critical transitional period.

Dagalo arrived on Saturday to Egypt in his first official visit and met with Kamel. Both addressed bilateral relations, strengthening cooperation between the two countries across various fields, and issues of mutual concern.

It also came as tensions over the GERD are increasing, as Egypt previously voiced its dissatisfaction with Khartoum’s refusal to support the Arab League’s solidarity resolution regarding the GERD.

Last week, Sudan Foreign Ministry said that it has reservations over a resolution issued by the Arab Foreign Ministers Council which voiced the support of the Arab League to Egypt regarding the GERD, after Ethiopia announced that it will move on the filling and the construction of its major dam.

Ahmed Aboul Gheit, Arab League Secretary-General, emphasised that the resolution rejects any violations to the historical rights of Egypt in the Nile, refused any unilateral procedures from Ethiopia, and necessitate Addis Ababa’s commitment to international laws.

Aboul Gheit also welcomed the US-sponsored agreement on filling and operating of the GERD, describing it as “a balanced, fair and protect the interests of the Egypt, Sudan and Ethiopia.”

Ethiopia government pulled out from the talks that were held on 27-28 February in Washington, rejecting the US-brokerage. Addis Ababa announced, “commencing first filling of the GERD in parallel with the construction of the dam, in accordance with the 2015 Agreement on Declaration of Principles without causing any significant harm.”

For Egypt, it refused Ethiopia’s intentions to move on in commencing the first filling of the GERD before reaching a final and fair agreement with Egypt and Sudan in this regard.

Egypt signed the US-brokered agreement of filling and operating of GERD, while Ethiopia and Sudan did not.

Jordan stands with Egypt to preserve its water security