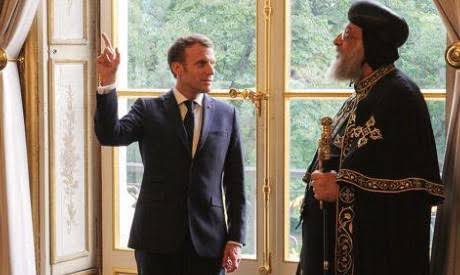 Egypt’s Pope Tawadros II of Alexandria visited, on Friday, the Élysée Palace and the French Senate, where he discussed Christians’ condition in the middle east, the Egyptian ambassador to France Ehab Badawy told MENA on Friday.

For his papal tour of the Coptic Orthodox Church’s parishes in Europe, he had a meeting with the French President Emmanuel Macron, focusing on the conditions of the Middle East in which Christians live. Considering Egypt’s situation, the pope said that the development in the country is improving the Copts’ situation.

The pope added that the development included the new law facilitating the building of churches. He also mentioned President Abdel Fatah Al-Sisi’s visits to the Cathedral every Christmas Mass, which means a lot to the Coptic people in the country and the world. The pope asserted that despite the unrest which many surrounding countries are suffering from, Egypt enjoys stability and security.

During the one-hour meeting, they also tackled the efforts exerted by Al-Azhar and the Coptic Orthodox Church within the Family Home initiative. The initiative was greatly welcomed by Macron, who, along with the French Senate, valued Egyptian-French efforts to counter terrorism.

Meanwhile, the president of the French Senate Gérard Larcher, expressed his respect for the Coptic Church, affirming that Pope Tawadros’s role as one of the most important figures of Christianity across the world.

In the meeting with the French Senate, Pope Tawadros mentioned the government’s efforts to renovate churches affected by terrorist attacks.