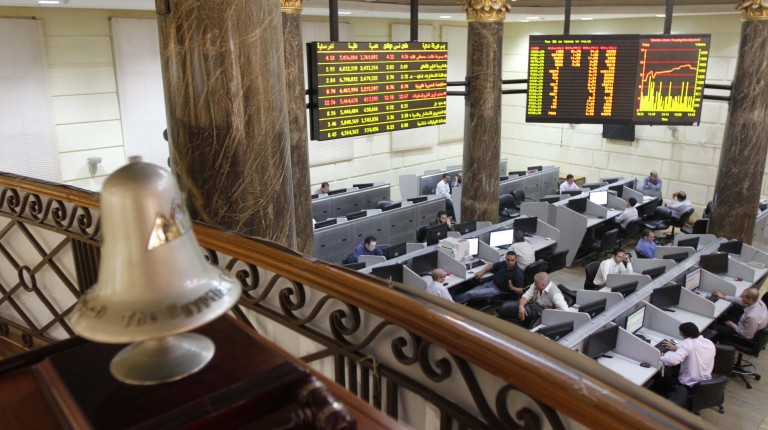 The Egyptian Exchange today celebrated the end of political tensions. The blue chip index, EGX30, climbed up 3.31% in first session this week and in the first response after the Central Bank of Egypt (CBE) cut interest rates for the second month in a row. The main index reached 14,315 points, while EGX50 rose by 4.8% to 2022 points.

In a clear turn of events, the EGX decided to suspend trading on 71 shares for 10 minutes, but this time because of the proportion of their gains exceeded the 5% barrier, unlike last week, when trading was suspended due to losses.

Mohab Agina, head of technical analysis at Beltone Holding, said that the market’s rise during today’s session is supported by the impact of the CBE’s decision cut interest rates, expecting the session to close in the green zone, advising investors to take part of the profits at the current levels, after the violent decline witnessed last week.

Agina said that the levels at 14,400 points will be tested during tomorrow’s session, with a medium-term sideways move, confirming that the market needs to confirm these gains.

Most leading stocks were going up supported by Egyptians and foreigners’ purchases, where CIB, the share with the biggest relative weight, gained 2.19% to EGP 78.5, while Qalaa Holdings share hiked 12% to EGP 2.3.

The market recorded trading worth EGP 932m until now on 545.2m shares over 28,400 transactions, after trading on 158 listed companies’ shares, of which 121 rose while 37 shares were unchanged.

Drop in leading stocks pushes EGX30 to decline further, though expected to bounce back this week

EGX indexes bleed due to “Friday disruptions” in Egypt

EFG Hermes accounts for 33.5% of EGX transactions in July