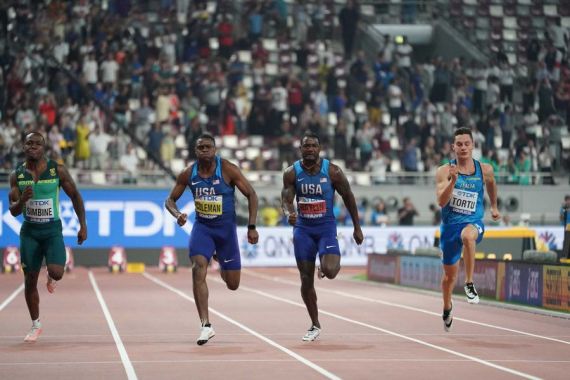 Coleman clocked a world leading time of 9.76 seconds in the blue ribbon event as his American compatriot and defending champion Justin Gatlin took silver in 9.89. Andre De Grasse of Canada was third in 9.90.

“I’ve been blessed with incredible talent and tonight I was able to show it. I have been working incredibly hard and this just makes it all worthwhile,” he said.

Coleman paid tribute to his teammate Gatlin, 37, who first won the world championships in 2005 and his Olympic title in 2004.

“Justin Gatlin is a great guy and great competitor. I remember watching him back in 2004 when I was eight years old and to think all these years later I could come and win gold too is a great feeling,” he said.

Gatlin praised Coleman and said he would again challenge him in Tokyo.

“Christian has had a spectacular season and I knew he’d be tough to beat. He ran a great race. But I have a message for next year – I’m coming. He’d better be ready,” he said.

The United States set the 4X400 meters mixed relay world record in the heat round in 3:12.42, beating the previous best time of 3:13.20 set three years ago in an American local event in Eugene. The mixed relay was included for the first time into the World Championships.

“It was fun. The first time I saw it on TV, it looked funny. You feel much closer to your teammates and we are working together,” said fourth leg runner Obi Igbokwe of the United States.

Wang Zheng bagged a bronze with 74.76 meters in women’s hammer throw, the first medal for the Chinese team in Doha as American DeAnna Price threw 77.54m to take the title.

“Today I just wanted to perform well, I did not expect to win a medal. I guess my shape must be good because I hit the net three times!” said Wang, silver medalist at London world championships two years ago.

Tajay Gayle created history by taking Jamaica’s first men’s long jump gold medal at the world championships as he stunned the field to win in 8.69m, improving his personal best by 37 centimeters. The 23-year-old already had a show of form in his first attempt of 8.46, a result which was enough to secure his victory.

Olympic champion Jeff Henderson of the United States bagged a silver in 8.39 and Cuba’s Juan Miguel Echevarria was third in 8.34.

“I just focus on one thing. I did not let anything to disturb or distract me,” Gayle said.