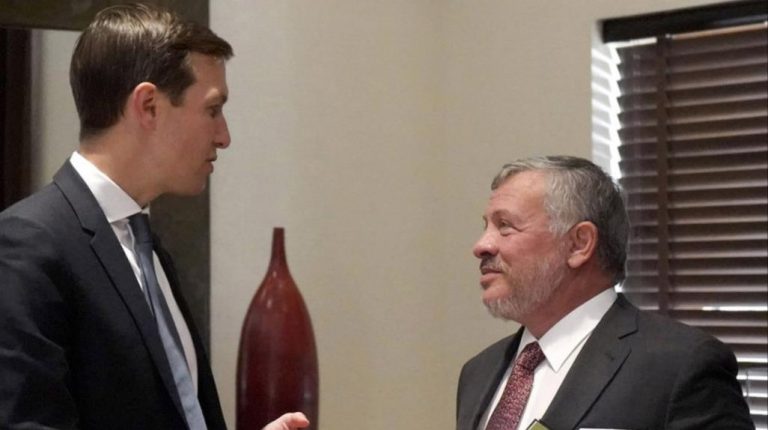 US President Donald Trump’s senior adviser and son-in-law, Jared Kushner, began a tour in the Middle East on Wednesday starting with Jordan, and would include Israel.

On Wednesday, Kushner met with Jordan’s King Abdullah II in Amman for talks on a US plan for Israeli-Palestinian peace. The two sides discussed “efforts to solve the Palestinian cause,” the royal court said in a statement, adding that Kushner was “visiting Jordan on a tour that includes a number of countries in the region.”

According to Israeli newspaper Yediot Ahronot, Kushner is planning to personally invite the Arab leaders to an Israeli-Palestinian peace summit at Camp David before Israel’s September elections.

According to the media report, Trump is expected to showcase his vision for peace between Israel and the Palestinian Authority during the summit.

Trump’s Middle East envoy, Jason Greenblatt, was accompanying Kushner. Greenblatt said a peace agreement between Israel and the Palestinians would be the Iranian regime’s “worst nightmare,” in an opinion piece published by Fox News overnight Tuesday.

In late June, Kushner described his plan for the Middle East as “the opportunity of the century” for the Palestinians, noting that their acceptance is a pre-condition to peace. His statement came during Trump’s administration-led $50bn economic “Peace to Prosperity” workshop in Manama.

The Palestinian Ministry of Foreign Affairs and Expatriates said Wednesday that all Israeli-American attempts to host and organise conferences and deals bypassing the Palestinian legitimacy will be doomed to failure.

The ministry added in a statement that the American administration is keen on the success of this conference so it can cover up the failure of the Manama workshop and to enhance Trump’s image in the coming elections, and support the chances of Israeli PM Benjamin Netanyahu in next elections.

Tarek Fahmy, professor of Political Science at Cairo University, said the proposed date of the conference goes along with both the Netanyahu’s and Trump’s electoral campaigns. He added on a post on his Facebook account that in case the conference is a success, it will be a win for the Netanyahu’s campaign over his opponents. It may also push some parties, including the Labor Party, to join Netanyahu’s government.

Third Arab Security Conference to kick off in Cairo on 22, 23 September

Israel approves construction of 715 housing units for Palestinians, 6,000 for settlers

Palestine’s Abbas abruptly withdraws from all agreement with Israel