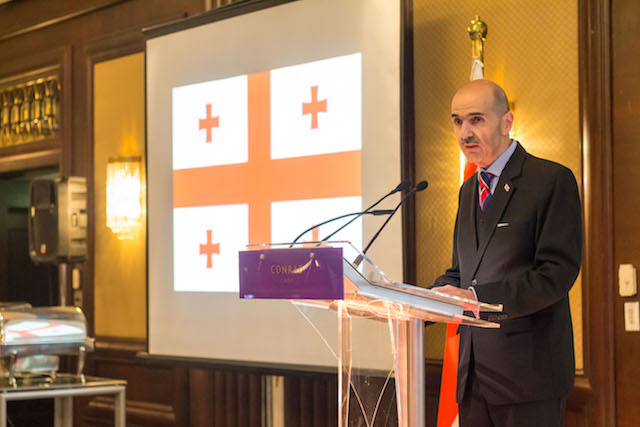 Egyptian tourist numbers to Georgia increased during the first half (H1) of 2019 by 12.1% to reach 3,734 tourists, ambassador of Georgia to Egypt, Alexander Nalbandov, said during his regular press conference for the Egyptian media, on Wednesday.

However, he added that the, “number of visitors from Egypt still needs to increase.”

Georgia and Egypt are discussing operating direct flights between Cairo-Tbilisi, which would be a new travel opportunity. This is in addition to direct flights already operating between the Georgian capital, on one hand, and Hurghada and Sharm El-Sheikh, on the other, the ambassador noted.

The growing number of visitors from the Middle East region to Georgia is noticeable from Saudi Arabia, Kuwait, the United Arab Emirates, and Jordan, the ambassador added.

Domestic and international tourism is one of the main industries of Georgia and an important factor of its economy, the ambassador noted, adding that about 71.8% of Georgia’s service export revenue comes from tourism.

“Revenues from international tourism displayed an increasing trend and reached $3.2bn in 2018, which is 19.1% higher than in 2017. Tourism made up 7.6% of the total GDP,” the ambassador highlighted.

Georgia witnessed a record-breaking number of 8.679544 million for international travellers visiting the country in 2018, representing an annual growth rate of 9.8% compared to 2017, the ambassador asserted. He noted that about 77.3% of the trips conducted by international visitors were from neighbouring countries, the ambassador said.

“Currently, we have to revise our tourism 2019 growth projection and take into account temporary travel restrictions on flights from Russia to Georgia starting on July 8, 2019. We expect tourism revenues to decrease in 2019,” said the ambassador.

Meanwhile, the ambassador stressed that, despite obstacles, the Georgian tourism sector continues to grow, adding that the outlook for the sector remains highly optimistic. Following this path, more jobs will be created, more income will be generated in the years to come, and the number of international visits to Georgia is expected to substantially increase.

The United States Department of State included Georgia among the safest countries to travel to, and this is an absolutely correct evaluation, the ambassador stressed.

Egypt is a very important market for us, we are committed to the success of our Egyptian franchise: Renaissance Capital