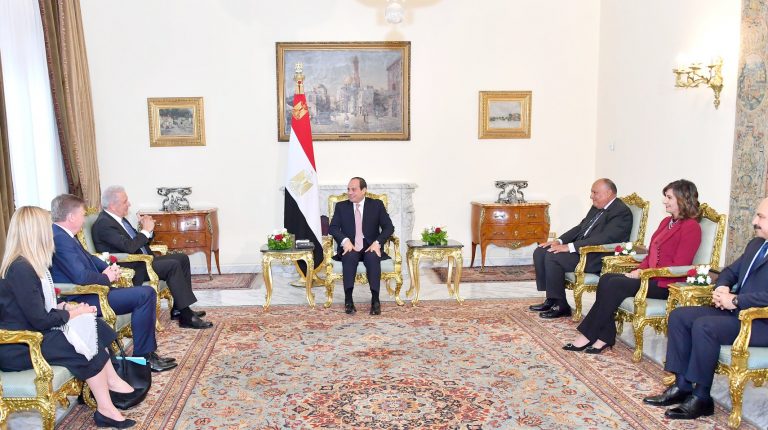 President Abdel Fattah Al-Sisi met with the European Commissioner for Migration, Citizenship and Home Affairs, Dimitris Avramopoulos, Ambassador of the European Union (EU) to Egypt, Ivan Surkos, and Egypt’s Minister of Foreign Affairs, Sameh Shoukry, in a meeting on Tuesday.

During the meeting, the president stressed Egypt’s interest in strengthening its relations with the EU in various fields, including the fight against illegal immigration, pointing out Egypt’s keenness to deal with migration issues from a comprehensive perspective, according to a statement from presidency spokesperson, Bassam Rady.

Egypt’s perspective for dealing with illegal immigration is to tackle its reasons without only focusing on the short-term security solutions. It targets also increasing cooperation in regard to legal immigration and combating human trafficking, as well as supporting the countries of the south in their efforts to achieve sustainable development.

Al-Sisi also stressed that the migration phenomenon is complex, transient, and requires a strengthening of cooperation at international and regional levels to address its challenges.

The president also reviewed Egypt’s efforts in the field of migration, pointing out that Egypt is hosting millions of refugees from different nationalities. The country deals with them without discrimination and instead, integrates them into Egyptian society, while they benefit from basic and social services, as if they were Egyptian citizens.

He further added that Egypt has succeeded in controlling borders and halting the flow of immigrants into Europe.

For his part, the European official stressed the EU’s interest in strengthening cooperation with Egypt as one of its most important partners in the Middle East. He praised the positive developments in Egypt in all fields, according to the statement.

Avramopoulos also pointed out that Egypt represents a model for stability and growth in the region.

Egyptians who get approval for immigration abroad in 2018 increase by 10.6%