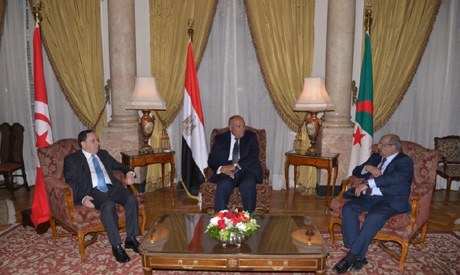 Egyptian Foreign Minister, Sameh Shoukry, Algeria’s Foreign Affairs Minister Abdelkader Messahel and Tunisia’s Minister of Foreign Affairs Khemaies Jhinaoui, highlighted the importance of unifying the Libyan military in order to achieve stability in the country during their meeting in the Tunisian capital on Wednesday.

Shoukry and the two parties rejected all forms of foreign interference and highlighted the nine points of agreement on respecting the sovereignty, stability, and security of the neighbouring country of Libya.

The three sides also asserted the need to apply a political solution to solve the Libyan crisis until elections are held. This is based on the 2015 Libyan political agreement.

Meetings between country officials take place regularly to discuss the situation in the war-torn country. The latest meeting was in March.

Egypt made progress regarding the Libyan situation as it attended meetings with a number of significant high-level Libyan figures, aiming to reach possible solutions for the Libyan conflict.

This comes amid a new wave of violence in Libya that began a month ago when the forces of the Libyan National Army (LNA), led by Khalifa Haftar, launched a military campaign against the UN-backed government in the capital, Tripoli.

Egypt has actively sought a solution to the Libyan turmoil in recent months, which has increased over the past few years following the downfall of Muammar Gaddafi, as militants have taken over several areas in Libya.