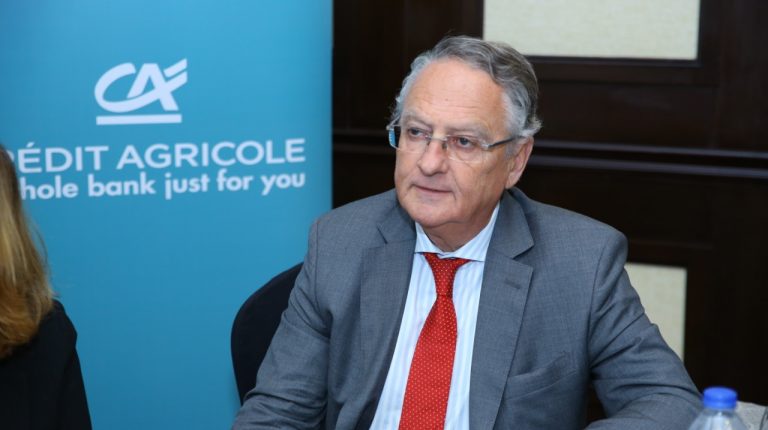 Crédit Agricole Egypt has announced that the bank is advancing solidly forth in the implementation of its growth strategy by relying on innovation and sustainability with the aim to further develop the bank’s leading position and usefulness to attain increased customer loyalty, employee engagement, usefulness to the community, and respect toward the environment.

Managing Director of Crédit Agricole Egypt, Pierre Finas, said that the bank plans to increase its branches network by 25%, launch new services, develop the level and quality of the current ones, while utilising the latest technologies.

In this context, he mentioned that, following the inauguration of the bank’s first cashless branch in Dandy Mall, Crédit Agricole Egypt opened the Messaha branch in Dokki last week, which is the third in the series of innovative branches concept ‘banki’ store

Another ‘banki’ store branch is scheduled to be opened in the city of Tanta soon.

This concept is based on the balance between the latest technology and human advice in a way to support the culture of digital transformation and financial inclusion.

Finas said that this comes in line with the Central Bank of Egypt’s direction and Crédit Agricole Egypt’s focus on value-added services to customers, as per the bank’s pledge of being “a whole bank just for you.” To ensure a distinguished customer experience, the bank has released the newest version of its ‘banki’ mobile application presently equipped with the smart touch identification to unlock many new features.

Moreover, continuing to promote reliance on renewable energy, Crédit Agricole Egypt has recently equipped its Sixth of October City branch with a solar-power plant, which is also in line with the government’s push to meet greater energy needs from renewable, clean sources.

The plant’s average contribution to the branch consumption is a monthly 30-45%,  and the energy saving per year is sufficient to cover the consumption of 105 households.

Crédit Agricole Egypt boasts the biggest rooftop solar panel owned by a bank in Egypt at its head office in New Cairo. Furthermore, the bank intends to expand in the usage of renewable energy in more branches.

In addition, the bank’s continued growth and commercial development has reflected on its recent financial results, as it has achieved a net profit of EGP 701.6m up 33.7% quarter-over-quarter (q-o-q) and 15.8 % year-over-year (y-o-y).

Backed by the positive economic outlook and the subsequent rise in national commercial activities, the bank’s loan portfolio has seen a 6.8% increase q-o-q and 25% y-o-y, with a view of meeting clients’ demands and boosting the Egyptian economy.

This commercial growth is paralleled with the bank’s commitment toward the community and support to the drivers of prosperity for all Egyptians everywhere. Accordingly, the bank has launched its foundation in 2018, which is actively working according to a sustainable approach to make a more profound impact and to drive positive change in society with a focus on youth through education, health, and entrepreneurship.

Established in 2006, Crédit Agricole Egypt has become an active player in Egypt’s financial industry by offering a wide range of innovative and convenient products to its clients across the entire spectrum: corporate, small and medium-sized enterprises (SMEs), and individuals.

It was newly established in the middle of 2017 as it has been licensed by the ministry of social solidarity in May 2017. Launching Crédit Agricole Egypt’s Foundation for Development is at the core of Crédit Agricole Egypt’s strategy and Credit Agricole Group’s fundamental values, which are based on having an impact on society, culture, and opening more innovative branches across Egypt.

Finas explained that the main initiative for the foundation this year–in line with their ambition to support the development of the health sector–Crédit Agricole Egypt Foundation for Development is sponsoring a major project for Abu El Reesh Japanese Children’s Hospital.

Giving special attention to children’s health and well-being, the foundation will renovate and upgrade three operation rooms, which will support up to 3,000 operations per year.

The foundation will be donating EGP 5m and is arranging a fundraising campaign to collect a total of around EGP 50m. Furthermore, the foundation will continue to support the children’s cancer hospital 57357 for more than 10 years.

Among the recent projects and initiatives launched by the foundation is the ‘Ebhar Misr’ initiative launched in 201,8 in cooperation with ‘Education First Foundation,’ in order to sponsor exceptional talents, to help them develop new skills, and nurture their talents.

This initiative is sustained in 2019 with more development since a digital platform will be launched soon to accept young applicants throughout Egypt.

The programme funds innovators and tech-enabled start-ups focused on social challenges in the fields of water, energy, food, health, and education. It is designed to support social entrepreneurs across various innovation cycle stages, from ideas and prototypes to creating products with market value and finding suitable investment opportunities.

Earlier this year, Crédit Agricole Egypt Foundation for Development signed an agreement with the ministry of social solidarity, under which it will offer an EGP 6m grant over three years to help finance micro-sized enterprises by women in the most deprived areas of Egypt.

Sustaining one of the fundamental projects in the education sector, Crédit Agricole Egypt is still continuing to fund around 200 community schools in poor remote villages in Upper Egypt where around 6,000 primary students benefit from the project with a financial support of EGP 2.5m. The bank works hand in hand with the Misr El Kheir charity organisation to witness this cause’s prosperity.

Crédit Agricole Egypt is a subsidiary of the Crédit Agricole Group, a market leader in Universal Customer-Focused Banking in France, and one of the largest banks worldwide.

With operations in 50 countries, the Crédit Agricole Group seeks to serve the real economy by supporting its clients’ projects in all areas of retail banking and associated specialised business lines.