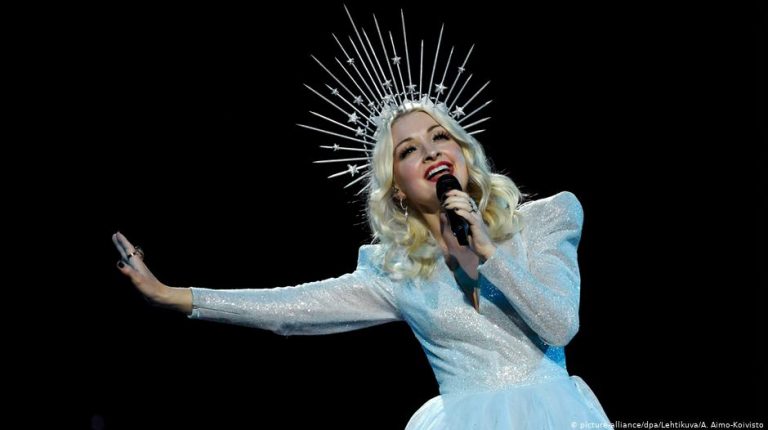 In a show of dazzling effects and extreme stylistic variety, 10 musical acts have qualified for the Eurovision song contest finale in Tel Aviv. Front-runners Greece and Australia were among the acts to make it through.After a colorful first semifinal Tuesday evening in Tel Aviv, the 10 countries selected to go on to the finale are Greece, Belarus, Serbia, Cyprus, Estonia, the Czech Republic, Australia, Iceland, San Marino and Slovenia.

The seven countries eliminated from the competition are Poland, Portugal, Montenegro, Finland, Hungary, Belgium and Georgia.

2019 marks a return of dazzle at Eurovision from a big LED screen. The most spectacular effects were employed in Australia's entry. Kate Miller-Heidke's "Zero Gravity" was all about the show, with the opera singer and two female acrobats resembling puppets impaled on poles, swaying this way and that as though floating in outer space. If only for its impeccable kitsch, the act was bound to go on to the finale, and with it, Australia has maintained its unbroken streak of always qualifying.

With Hatari's song "Hate Will Win," Iceland's entry had equally elaborate production values. In the background, red chains on the LED screens seemed to suggest that people have become machines.

Hatari growled and screamed a song of protest against capitalism. The three-piece band was supported by three backing dancers, all clad in rubber outfits, harnesses, masks and chains.

Estonia's Victor Crone had a far less forbidding message. In his upbeat ditty, despair gives way to fragile hope, then consolation and confidence. Crone's background as a music writer in Tennessee, New York and at Capitol Records in Los Angeles was apparent.

Serbia's entry, Nevena Bozovic, wore a black gown with one leg exposed. With much waving of her braceleted arms and tossing of hair, she sang her ballad "Kruna" (Crown) as background colors from the LED screen swirled and spiraled in a vortex up to the heavens.

In "Better Love," Greece's Katerine Duska, with her husky, dark, versatile voice, delivered a celebration of femininity. She was backed up in her all-female act by sword-bearing dancers in diaphanous chiffon-clad gowns who cavorted in front of a flower motif backdrop of lilies.

Certainly the biggest surprise of the evening was the qualification of Serhat from San Marino. His song "Say Na Na Na" was all fluff and no content before a candy-striped LED backdrop. This is the second Eurovision entry for the songwriter, music producer, TV host and producer.

A colorful galaxy unfolded in the background, but the couple didn't budge from their position at center stage and gazed into each other's eyes throughout the three-minute song.

Opening this year's songfest with the motto "Dare to Dream," Netta Barzilai, last year's Eurovision winner, dazzled with a performance of her winning song "Toy," flanked by an army of dancers all wearing her trademark red garb.

Voting in the first semifinal was allowed for the participating countries, joined by Israel, Spain and France. Their decision determined half of the final result; the other half was determined by judges, experts in the music industry named by the participating public broadcasters.

The second semifinal for the Eurovision song contest will be held on Thursday, with the grand finale scheduled for Saturday.

Belgium’s Port of Antwerp to develop bunkering activity in Egypt