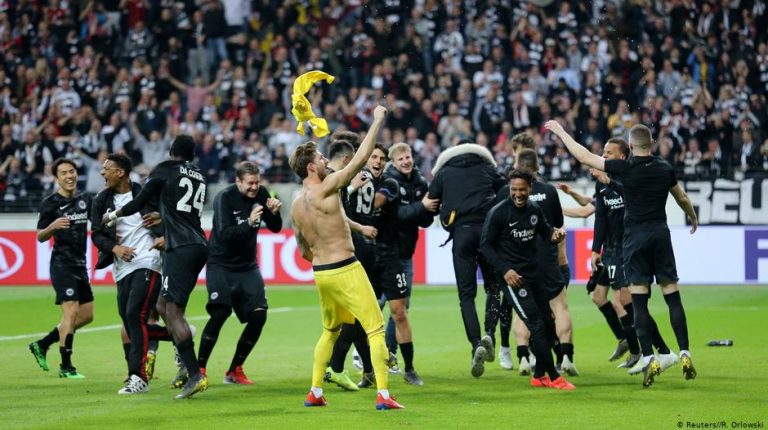 After years of instability, Eintracht Frankfurt are enjoying a magical season in both the Bundesliga and in Europe. DW’s Felix Tamsut describes another magical night at the Waldstadion, and explains what’s behind it.Two hours before kickoff in Frankfurt, the home fans started swarming into the Waldstadion. There was a sense of optimism in the air, a sense of belief that a first European semifinal in 39 years was possible.

Eintracht Frankfurt and their fans are one of the most celebrated teams in Germany at the moment. The Eagles' attacking, fun-to-watch football has led to an extraordinary Europa League run, as well as put them in contention for a coveted, Champions-League securing fourth place in the Bundesliga. All along the way, their fans have organized choreographies in each and every home game in Europe this season, and their away following numbers have often been in double digits. One of those fans is Susie, and she can't believe how things have changed this season.

"When we lost away to Ulm in the first round of the German Cup, I thought: We've won the cup, we had an incredible season, but from now on it's back to normal,” Susie told DW. "Now, I have the hope we'll get to the Europa League final in Baku. The hope dies last.”

For Susie, and for so many Frankfurt fans, one of the reasons it's so incredible to be a fan of this club is the delicate but existent relationship between the club and its active fan and ultra groups.

While many clubs criticize their fans, she says, things at Eintracht work a little differently. "The club talks to its ultras and fan groups, and this makes the positive package that is Eintracht so special," Susie said. "This is the secret of our success."

Internal talks instead of public criticism

While the current relationship is blooming, it hasn't always been easy. When pyrotechnics were thrown from the direction of Eintracht Frankfurt's stand during the away game against Inter Milan in the previous round, the club opted for an internal discussion between the fans and the board rather than the common practice, often seen at other clubs, of publicly criticizing their fans in similar instances.

In a conversation with DW, Eintracht Frankfurt's vice president Stefan Minden describes how this decision came about.

"We see developments with other clubs' handling of their active fan scenes, but we have people in the boardroom that get our fans, our ultras, know what moves them, and that makes a difference," said Minden, who believes the importance of dialogue between both sides cannot be underestimated.

"It's very important for us to talk about things from the inside, and surely it doesn't help to go on camera and say how bad our fans are," Minden added.

Both Susie and vice president Minden agree that the fine balance that Eintracht have achieved this season is, at least in part, why the team on the pitch is playing so well.

The atmosphere at the Waldstadion for the second leg against Benfica was nothing short of electric. Often only a club's hardcore support are the ones that constantly sing and support their team, but that wasn't the case against Benfica. In truth it hasn't been the case for all of Frankfurt's home games in Europe. The stadium created a wall of noise throughout the game, including from the stands that are not part of any ultra group. The sound was deafening every time Eintracht got close to goal.

When Filip Kostic scored the opener, the stadium got so loud that the stadium announcer's attempts to shout Kostic's name were drowned out by the fans. The noise continued in the second half, and then, 23 minutes from time, Sebastian Rode delivered the decisive second goal. This time, the scorer's name was heard loud and clear.

Frankfurt overcame a nervy finish to pull off another sensational European success. After the final whistle, the club's ultras couldn't help themselves and drew closer to the pitch in order to hug their heroes. As the stewards refused to let them through, the players jumped over the advertising boards straight into the ultras' arms. It was a moment that exemplified the perfect balance that currently exists between Eintracht Frankfurt, the players and the club's hardcore support. They work together, and the result is a European run that'll be remembered in Frankfurt forever.

Despite the difficult opposition in Premier League side Chelsea, the Europa League final in Baku is in reach.

Hero aims to increase its exports to EGP 650m next year: regional head