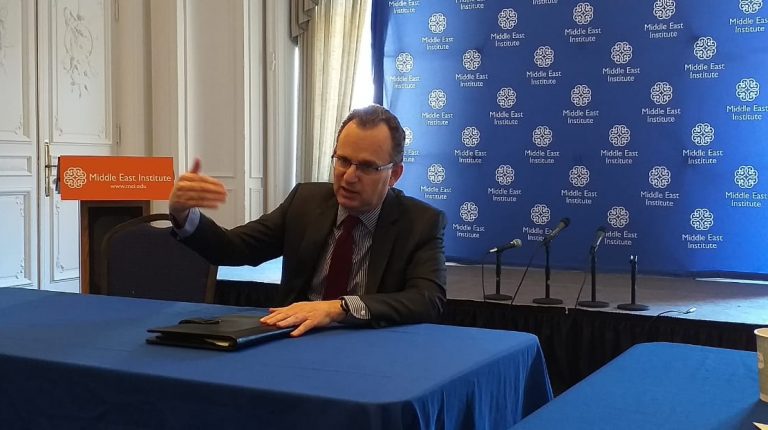 Washington DC- The anticipated visit of President Abdel Fattah Al-Sisi to Washington, DC in April comes as part of the warm relations between the two countries and their leaders, said Paul Salem, president of the Middle East Institute in Washington, DC on Monday.

The visit will not affect the US position on the issue of the Golan Heights, Salem told journalists.

“Although President Trump will not back down from his decision to consider Israel’s sovereignty over the Golan, which he has taken to guarantee the support of the Evangelical voters and to support Prime Minister Netanyahu in the upcoming Israeli elections, he [Trump] recognises the importance of the Egyptian role in several files, notably the Gaza Strip and relations with Fatah and Hamas,” Salem said.

Salem explained that the relationship between the current US administration and Egypt considers many military and economic aspects when dealing with the Egyptian file. Among these aspects is the peace treaty with Israel, and Egypt’s status among the American people, Salem said, adding that generally there are no tensions, although the American media and the Congress have been criticising the Egyptian government since 2013.

He said the war on terrorism is another dimension that enhances the relationship between the two countries.

As for Egypt’s efforts to diversify its arms suppliers, Salem said that this trend is also present in the Gulf states and Turkey. He added that the American administration is keen to keep the status quo with regards to the military strategic relations. “The US administration knows that we are talking here about diversifying sources and not replacing one source with another.”

Regarding the constitutional amendments in Egypt, Salem said that he sees these changes as state policy and that they will not affect the bilateral relations.

He asserted that Egypt has promising opportunities for investment, especially in some sectors. However, he implied that the government should address bureaucracy, adding that Egypt and Saudi Arabia are the biggest two markets in the Middle East. “However, the judiciary in Saudi Arabia might raise concern among investors,” Salem added.

No confirmed information about the so-called ‘Deal of the Century’

According to Salem, if the so-called deal of the century would take place, Egypt would have an essential role in determining the extent of the response of Arab countries to the deal, adding, “The Trump administration understands that Egypt is keen that any peace arrangements must first receive Palestinian acceptance.”

He explained that there is no reliable information about the so-called deal of the century and that the common factor in the leaks that are being circulated relates to the existence of one state, and granting Palestinians self-governance over some lands, in addition to providing economic benefits to be financed by Arab countries. “This is unacceptable to the Palestinians, to Egypt, or to any of the Arab states,” Salem stressed.

The president of the Middle East Institute believes that the next US presidential election in November 2020 has already started. And that the possibility of Trump winning a second term remains strong, unless a strong Democratic presidential candidate shows up.

He added if the Democrats win the presidency, it might negatively affect the US-Egyptian relations. However, the essence of the relations between the two countries to remain unchanged, he explained, adding that, on the other hand, US relations with Saudi Arabia may witness some negative changes.

The Iranian file is the top priority on Trump administration’s agenda, Salem stressed, adding that despite harsh sanctions against Iran, the US stance on the ground remains soft.

“The United States did not exert any military pressure on Iran in Syria to achieve the main objective of the sanctions, which is to curb Iranian influence,” he said.

According to Salem, the US-Iranian relationship can be described as ‘no war, no negotiation’, adding that the US military withdrawal from Syria and the possibility of withdrawing from Afghanistan will leave Iran with an opportunity to strengthen its presence in the region.

“Similar to the status quo during the time of the Soviet Union,” Salem concluded.

China is the main concern for Americans

Salem asserted that China has been a long-time concern for Americans. During a recent visit of the institute to the Pentagon, one of the Department of Defence’s officials said that China is the first and main concern for them.

The official added that the Americans do not have the same concern for Russia, as it is less vital than China, in terms of the economy and population which is decreasing.

However, China enjoys a strong economy, enormous population, and advanced technologies, especially the 5G technology, the official added. Salem noted that the Chinese are more advanced than the Americans in this type of technology which will lead the world.

The official also expressed the American concern over the Chinese superiority in investing in artificial intelligence, as they fear China could surpass them.

Salem revealed that the Pentagon officials made a permanent impression to him that any American view toward the Middle East should involve the question of:  Where is China?

We began to notice disappearance of cash, says Al-Sisi

IMF delegation to visit Egypt in May: Lall