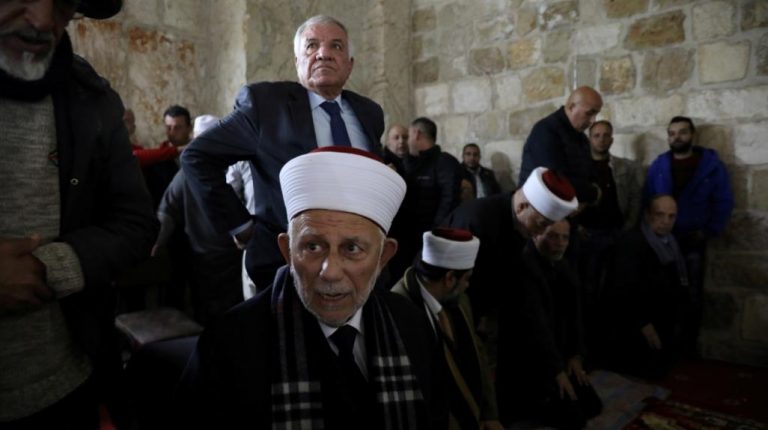 The Israeli police released on Sunday Sheikh Abdelazeem Salhab, the head of the Islamic authority that oversees Muslim holy sites in Jerusalem, and his deputy Najeh Bukairat, after they have been briefly detained for hours following the recent protests in Jerusalem.

Salhab, 80 years, is the highest Jordanian official in Jerusalem, as Jordan is the recognised supervisor of the Islamic and Christian holy places in Palestine.

Israel released the Sheikh on the condition of banning him from entering Al-Aqsa compound for a week.

On Friday, hundreds of Palestinians held the Friday prayer at an area by the Al-Rahma gate of the Al-Aqsa Mosque for the first time in 16 years since the Israeli army closed it in 2003.

The gate has a significant location inside the compound as it leads shortly short to the Al-Aqsa Mosque itself.

Following the detention of Salhab, Jordan’s Minister of Islamic Affairs, Abdul Nasser Abu Al-Basal, denounced the Israeli move, and described it as a dangerous and an unacceptable escalation that affected Jordan’s role as the custodian of the Muslim holy sites in Jerusalem, according to the Jordan state-run news agency, Petra.

The Palestinian Prisoners Club announced that on Sunday that the Israeli forces have arrested 100 Palestinians in different places in the West Bank and Jerusalem during the past five days.

Israel used to close the gates of the entire Al-Aqsa Mosque from time to time, inciting tension with the Palestinians who resist the Israeli moves.

More than 220 Palestinians were killed in Gaza since the beginning of the weekly demonstrations in Gaza in March 2018, while thousands were injured. The demonstrations titled ‘Great March of Return’ called for the Palestinians right to return to their homes which were occupied by the Israelis after 1948.