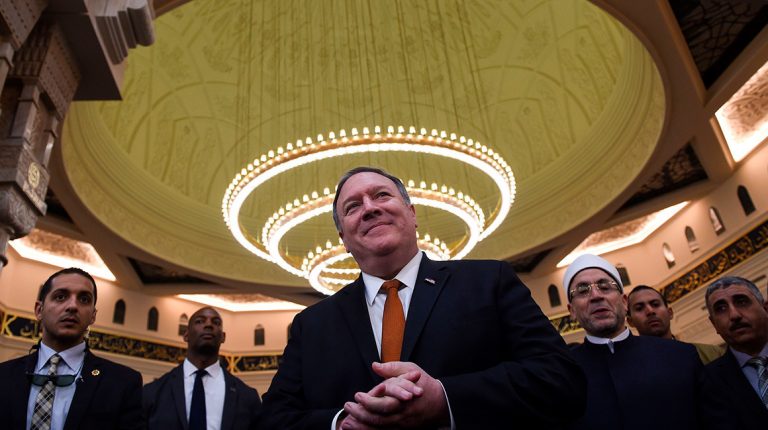 Columnists picked up various topics on Sunday’s newspaper issues including commenting on the recent speech of the US Secretary of State Mike Pompeo who visited Cairo on Thursday last week. Cairo’s hosting of the Africa Cup of Nations in 2019 was also tackled.

Emad El-Din Hussein, editor-in-chief of the private newspaper Al-Shorouk wrote that Pompeo’s speech is highly significant as “it blows up the policies of US former President Barack Obama in Cairo.”

Hussein noted that the speech came as no surprise, as it asserted that Trump’s America is entirely dissimilar from Obama’s one.

Hussein added that Pompeo continued to criticise Obama’s conceptions and policies in Arab countries, arguing that this means the Trump administration would not support any revolutions or uprisings involving members of political Islam.

Hussien also mentioned Pompeo’s line “The US is a force for good in the Middle East,” wondering if this statement is true, given Trump’s recent remarks over the withdrawal from Syria when he said that the US is pulling its forces because Syria is “a land of death not a land of oil and gas.”

Meanwhile, the state-owned Al-Ahram’s editorial also tackled Pompeo’s speech, suggesting that his remarks mean that the US administration is planning to divide the region in order to enhance Israel’s situation under the pretext of fighting terrorism.

Al-Ahram’s editorial emphasised that Arab countries will not come together to make “Pompeo’s dream come true over setting-up a collation of Egypt, Jordan and Gulf states.”

On the other hand, Mohamed Amin of private newspaper Al-Masry Al-Youm opinionated that Cairo has the right to celebrate Pompeo’s remarks as they are considered an “American hail,” which asserted religious freedoms in Egypt.

Amin noted that Pompeo praised President Abdel Fattah Al-Sisi and described him as “a brave hero” who gives his people the freedom to worship.

Amin highlighted that Al-Sisi’s inauguration of a mosque and a church in the New Administrative Capital during Pompeo visit’s asserted his position.

In a different context, Abla Al-Ruwaini of Al Akhbar daily wrote that despite Cairo’s hosting of the Africa Cup of Nations five times before, yet this time is a special case as it comes following a 12-year absence.

Al-Ruwaini opinionated that choosing Cairo is sending a message to the entire world that Egypt is a safe country, noting that the hosting is an opportunity to enrich the fields of tourism, economy, and investment.