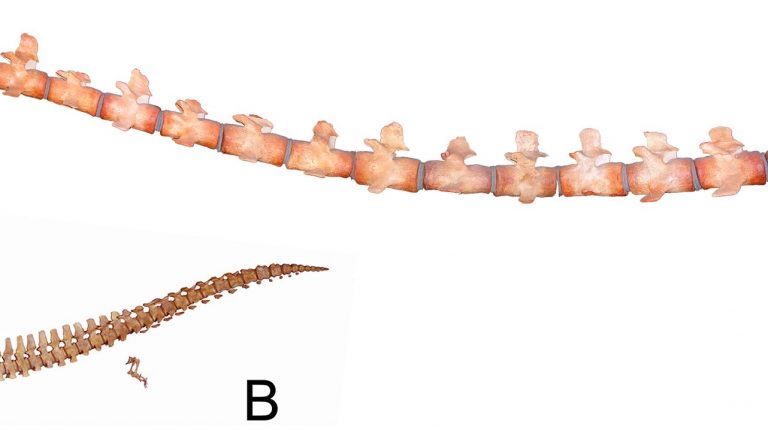 Before 37m years, the Fayoum desert—where the 200 sqkm Wadi Al-Hitan is located—was covered with water as part of the old Mediterranean Sea, “Tethys Sea,” which has existed about 200m years ago. In this environment, Basilosaurus isis lived as one of the biggest marine predators in history topping the ecological pyramid.

According to a study published on Wednesday in the open-access journal PLOS ONE, an international research team revealed for the first time the diet of Basilosaurus isis. The 15-metre-long and 1.5-metric-tonne ancient whale was an apex predator that lived in the late Eocene about 38-34m years ago.

In 2010, a team, led by Manja Voss from the Museum of Natural History in Berlin, uncovered the stomach contents of an adult Basilosaurus isis in the Wadi Al-Hitan. The discovery revealed the remains of sharks, large bony fish, and, most numerously, bones from Dorudon atrox, a smaller species of ancient whale.

The Wadi Al-Hitan, which is now a UNESCO world heritage site, was once a shallow sea during the late Eocene period and is remarkable for its wealth of marine fossils.

The Basilosaurus skeleton was distinct from other skeletons in the cluster, containing Basilosaurus isis incisors and sharp cheek teeth, as well as bones. Most of the fish and Dorudon whale remains showed signs of breakage and bite marks, and tended to be clustered within the body cavity of the ancient whale.

The discovery derives its importance from being the first direct evidence of Basilosaurus’s diet. The study confirms a predator-prey-relationship of the two most frequently found fossil whales in Wadi Al-Hitan, Basilosaurus isis, and Dorudon atrox. It also extends our knowledge of ancient whales, and completes the bigger paleoecological picture of the late Eocene’s oceans of Egypt, said Voss.

She informed Daily News Egypt that the field work of the study lasted for three weeks in December 2010, and again in summer 2016, including the study of the stomach content remains and comparisons with other Basilosaurus and Dorudon specimens.

Professor Olivier Lambert from the Royal Belgian Institute of Natural Sciences informed Daily News Egypt that the study is a very fine, important contribution, as “we have a very limited knowledge of the prey types for most extinct whales, as stomach contents are extremely rare. Any new, well analysed find is thus important,” he said.

Lambert explained that Basilosaurids represent a key group in the evolutionary history of cetaceans. “First they are the earliest whales to be fully aquatic (their hind limbs are so reduced that they cannot bear their weight on land any more). Second, they most likely gave rise to the two modern lineages: the mysticetus (baleen whales and relatives) and the odontocetes (echolocating whales and dolphins),” he pointed out.

According to Lambert, finding clues on Basilosaurids’ trophic interactions (predator-prey interactions) is crucial to better understanding the ecology of the last common ancestor of all modern whales and dolphins.

Basilosaurus is a very strange whale, with body proportions departing from all other contemporaneous cetaceans. Because no modern analogue could be found, the ecology of this animal is still poorly understood, even if this is one of the most common late Eocene whales, Lambert concluded.