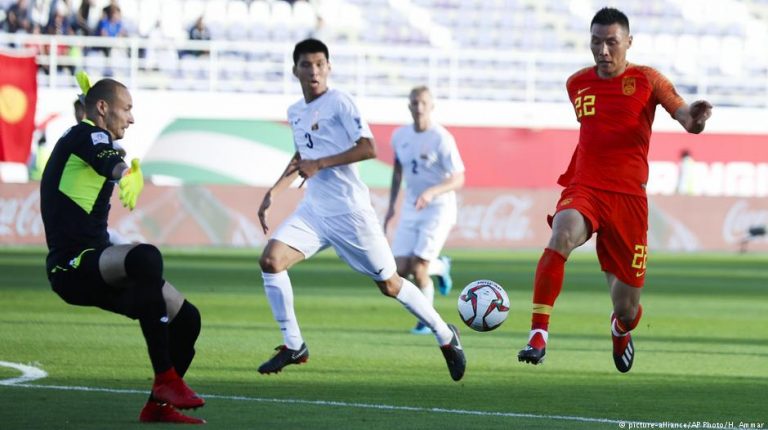 China were forced to fight back from a first-half deficit against Kyrgyzstan in the Asian Cup. The favorites had to rely on two goalkeeping errors in the second period to seal a shaky 2-1 victory.Germany's Vitalij Lux was left ruing a number of missed chances as Kyrgyzstan missed out on causing yet another shock in the 2019 Asian Cup against match favorites China in Group D.

With Jordan stunning Australia, Bahrain holding United Arab Emirates to a draw and India thrashing Thailand, the tournament has already had its fair share of upsets.

And the Kyrgyz, making their debut in the competition, almost delivered another shock result in an impressive display belying their inexperience at this level.

In an open-ended match played at a frenetic pace, Kyrgyzstan matched their more illustrious opponents with a committed and energetic display.

And they could, or should, have been three goals up after a dominant first half, but had to make do with a 1-0 lead heading into the break.

In the 26th minute, Lux, who was born in Kyrgyzstan but grew up in Germany, sprayed a good chance well over the bar when facing China's keeper Yan Junling one-on-one. And he then poked another chance wide under pressure inside the box.

Sandwiched in between, however, in the 42nd minute, Akhlidin Israilov put Kyrgyzstan ahead with a well-taken volley from just inside the box. Mirlan Murzaev headed back a long throw and Israilov did the rest to send shockwaves around the Khalifa bin Zayed Stadium.

But all that hard work was undone within five minutes of the restart as China were afforded a route back into the match following a calamitious goalkeeping error from Kyrgyz keeper Pavel Matiash.

A corner was headed towards goal and Matiash, attempting to tip the ball over the bar, comically palmed it into his own net under no pressure.

And another defensive error in the 71st minute gifted China the lead. Matiash rushed off his line to try and clean up a long ball over the top, but the excellent Yu Dabao rounded the hapless keeper and slid the ball in from a tight angle.

For China coach Marcello Lippi, who guided his native Italy to World Cup glory in 2006, there is much to improve if China are to fulfill his prophecy that they will be a surprise package for the title this year. Three points, however, will give them a good base to tackle the rest of the tournament.

For Kyrgyzstan, it's a case of what might have been. An industrious but also inventive performance was brought undone thanks poor finishing in the first half and horrendous goalkeeping errors in the second. Their tournament doesn't get any easier either, with a clash against heavyweights South Korea coming next.