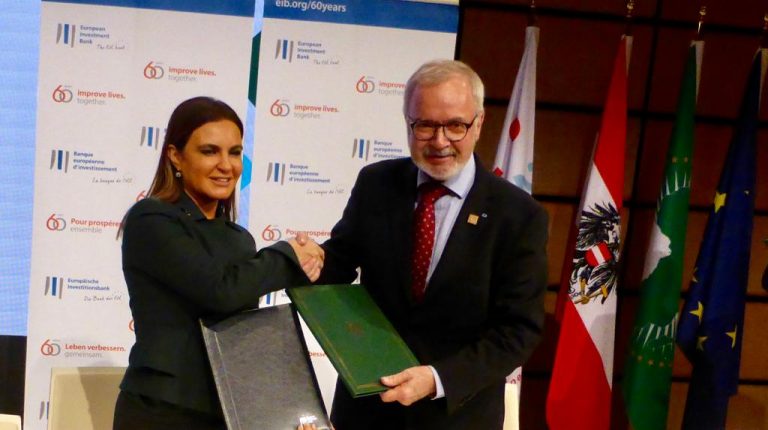 The three projects, signed at the summit attended by heads of state and government officials from across Africa and Europe, demonstrate the European Investment Bank’s technical and financial support for life-changing investment across the continent.

President of the EIB, Werner Hoyer, said, “new investment is crucial to unlock economic opportunities, improve lives and tackle the impact of a changing climate and as the EU Bank, the EIB, is committed to ensuring the sustainable development goals can be achieved in Africa.”

Hoyer added that sustainable transport, clean energy, and communications are shared challenges for Europe and Africa, and the three projects highlighted on Tuesday show how working with world-class partners across Africa supports projects that make a lasting difference.

Over the last decade the EIB has provided €21.9bn for investment across Africa, he noted.

In West Africa the EIB will back completion of a new cross-border interconnector to enable first-time access to electricity by 200,000 people in Guinea and increased use of clean energy in Guinea, Mali, Liberia and Cote d’Ivoire. Whilst in East Africa, new support for telecom investment will allow 9 million to benefit from expansion of the fibre optic internet network in five Kenya, Rwanda, Uganda, Zambia, and the Democratic Republic of Congo.

For transforming sustainable transport, the EIB provides €350m backing for the Cairo Metro.

The EIB will support new investment to upgrade the 44km Line 1 of the Cairo Metro. This is one of the busiest metro networks in the world with more than 2.6 million passengers a day, and once complete the upgrade will increase passenger capacity by 40% and improve operational reliability. Improving public transport is crucial to enabling alternatives to car use and cutting carbon emissions.

Ahead of the formal announcement Egyptian President Abdel Fattah Al-Sisi and Hoyer discussed future investment priorities in Egypt and the impact of the €4bn of EIB support for private sector, transport, water, and wastewater investment in the country since 2012.

Besides, the bank provides €130m for Guinea-Mali interconnector. The new electricity interconnector between Guinea and Mali is a crucial link in the Western African Power Pool that will provide reliable access to renewable energy to inhabitants of four countries and expand access to thousands of people living in rural communities in Guinea.

The EIB has agreed to support the new connection that will reduce the need to use costly diesel generators and contributes to the UN Sustainable Energy for All initiative.

Connecting East Africa to the world, €15m to be allocated for regional communications network.

Africa is one of the fastest growing regions for data traffic growth, however, limited connectivity is holding back economic potential and innovation. A new 4,850km fibre optic network to be built in the next two years will transform communications for an estimated 9 million people in Kenya, Rwanda, Uganda, Zambia, and the Democratic republic of Congo.

Once operational the improved telecommunications infrastructure is expected to support sustainable economic development across the region by enabling local communities to gain access to financial services, mobile health and education services, and agricultural information including commodity prices and weather alerts.

Reflecting the importance of strengthening connectivity across Africa the EIB hosted a workshop during the Africa-Europe Forum to examine the impact of recently supported projects with leading public and private sector partners from across Europe and Africa. This included representatives from Austrian Development Bank and multinational energy company Engie.