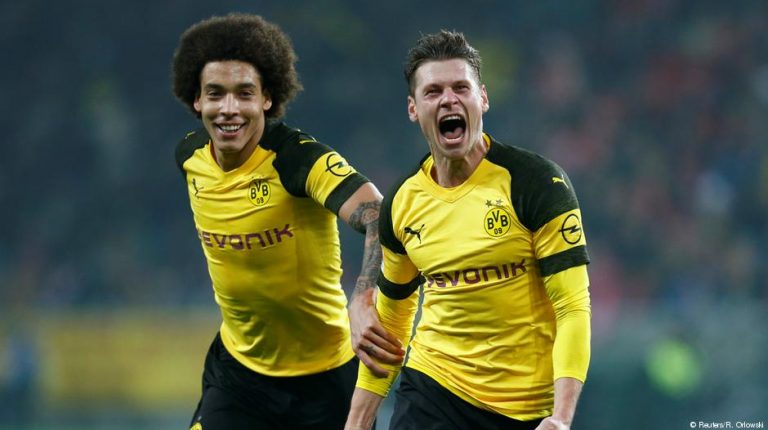 A late Lukasz Piszczek effort which came down off the crossbar gave Borussia Dortmund all three points after Mainz's Robin Quaison had cancelled out substitute Paco Alcacer's opener in a dramatic second half.

The visitors came out of the traps quickly in the first ten minutes but failed to create any clear-cut chances in an intense period of pressure. Captain Marco Reus headed wide from close range before Mainz goalkeeper Robin Zentner tipped a long-range effort from Axel Witsel over the bar. At the other end, BVB goalkeeper Roman Bürki pulled off a similar save from Caricol Aaron as the first half ended goalless.

Mainz began the second half as Dortmund had started the first – dominating possession and creating chances. Dortmund on the other hand, Jadon Sancho and Mario Götze in particular, weren't enjoying their best days – until the entrance of Paco Alcacer.

The Spaniard, who signed a permanent deal with the club this week, had only been on the pitch for 150 seconds when Reus unselfishly squared the ball to him in the box to give Dortmund the lead – the super sub's eighth goal off the bench this season.

But Dortmund's lead lasted only four minutes as Mainz deservedly equalized, Quaison capitalizing on a deflected through-ball from Alexander Hack, before Piszczek restored the visitors' lead with his beautiful, curled effort.

Dortmund withstood a late period of Mainz pressure to hold on for a win that was made even more important by the news – flashed up on the big screens in Mainz – that Bayern Munich had dropped points at home to newly-promoted Fortuna Düsseldorf.

As it happened: relive the action below!

+++ FULL TIME: +++
Dortmund hold on for a hard-fought victory against a valiant Mainz side.

90+5' Ball across the face of the BVB goal but no Mainz player can get a touch on it and Dortmund survive!

90+3' Mainz are throwing everything forward as a cheer goes around the ground from both sets of fans – because the big screen shows that Fortuna Düsseldorf have equalized in Munich! A win here for Dortmund would extend their lead over Bayern to nine points – but can they hold on here?

89' Alcacer shields the ball well on the edge of the Mainz box and finds Reus who has substitute Pulisic to his right but opts to shoot – and Zentner saves well.

88' Mainz win a corner after Boetius' shot is deflected wide, but the delivery is too deep.

86' Mainz are probing and looking for a way though. Borussia Dortmund don't have this game wrapped up just yet.

83' Substitution for Borussia Dortmund: Hakimi is replaced by Diallo

82' Penalty appeals from the home team after Akanji appears to shove Mateta to the floor in the box but the referee waves play on.

76' GOAL! Mainz 1-2 Borussia Dortmund (Piszczek)
At the second attempt, the Polish fullback curls a perfectly placed right-footed effort off the crossbar and into the net to restore Dortmund's lead.

74' Mainz's equalizer was hardly undeserved and they're keeping up the pressure, as a shot goes just wide.

70' GOAL! Mainz 1-1 Borussia Dortmund (Quaison)
A deflected throughball from Hack wrongfoots Zagadou and leaves Robin Quaison one-on-one with Bürki, and the Swede makes no mistake, sliding the ball under the goalkeeper to equalize! What a game we have now!

66' GOAL! Mainz 0-1 Borussia Dortmund (Alcacer)
Honestly, you just have to laugh! Incredible! Sancho feeds in Reus who has the presence of mind to square to Alcacer who taps the ball into the empty net. The Spaniard has been on the pitch for 150 seconds before scoring his eighth goal as a substitute. Talk about a super sub.

64' Substitution for Borussia Dortmund: Mario Götze is replaced by Paco Alcacer
A logical move from Lucien Favre – although Sancho and Bruun Larsen would have been just as worthy candidates for an exit. Can the Spaniard give Dortmund more firepower upfront?

63' Bruun Larsen picks up the ball inside the Mainz box and tries a cheeky effort through the defender's legs – but it doesn't fool Zentner.

60' For the second time in a couple of minutes, Sancho cuts inside and tries to find Reus but his radar is all off. A bad day at the office for the English teenager so far. On the Dortmund bench, Paco Alcacer is warming up.

56' Delaney shows neat footwork to turn on the edge of the box and find Bruun Larsen, who shoots low and wide.

53' Hakimi injects some pace into Dortmund, driving through midfield and finding Götze. Dortmund win a corner … which is cleared.

52' Danny Latza hits the side netting for Mainz, who have started the second half the way Dortmund started the first – on top!

50' Dortmund advance with Götze and the German has Reus and Sancho as options – but he finds neither.

46' An early chance for Mainz as Mateta sees his effort deflected just wide. Dortmund haven't woken up yet!

+++ SECOND HALF +++
The hosts get us back underway in Mainz. No changes on either side at half-time but surely it won't be long before we see Paco Alcacer for BVB?

+++ HALF-TIME: Mainz 0-0 Borussia Dortmund +++
It looked like it was going to be a long afternoon for Mainz after Dortmund came flying out of the blocks in the opening ten minutes. But depsite all their pressure, they didn't create any clear cut chances and Mainz have worked their way back into the game. Both goalkeepers have tipped good long-range efforts over their respective crossbars to ensure it remains goalless at the break. Dortmund will need to find more creativity in the second half.

45' One minute of added time at the end of a combative first half. Just enough time for a last Mainz corner … which comes to nothing.

42' … but Sancho's delivery is cleared at the near post and Mainz break! Fortunately for BVB, Akanji is on hand to snuff out the danger.

39' … which is cleared. Five minutes to half-time, will we see a goal?

38' We have another lull in proceedings. But this is precisely what Mainz coach Sandro Schwarz will have wanted. His team are getting in Dortmund's faces and preventing the league leaders from developing a rhythm. And now they win a corner in front of the traveling Dortmund fans …

34' Nice combination play from Reus and Witsel in the Mainz box, but Mainz clear. Thomas Delaney goes into the book for a clumsy challenge on Mateta, who was trying to hold the ball up.

33' Brosinski has a free-kick in a similar position to Reus' a few minutes ago. Like the BVB captain, the Mainz right-back shoots straight at the goalkeeper.

31' Reus fires the free-kick over the wall but straight at Zentner and Mainz can counter … Brosinski beats Hakimi down the right but Dortmund eventually clear. End to end stuff.

30' Dortmund have a free-kick on the edge of the box after Kunde is adjudged to have fouled Hakimi. The Mainz midfielder sees a yellow card too, which seems a bit harsh.

27' Whatever Axel Witsel can do, so can Caricol Aaron! The Mainz left-back cuts inside onto his right foot and fires a powerful effort at goal which Bürki tips over the bar, just as his counterpart Zentner had done earlier. Chances at both ends now!

25' BVB coach Lucien Favre is out in his coaching area, wrapped up against the cold in the Palatinate and shouting instructions, a notepad in his hand, his breathing visible. Penny for his thoughts so far?

24' Bruun Larsen plays a neat throughball into Sancho, who swivels in the box and cuts back but there's nobody there for BVB.

22' Witsel tries again from distance, this time much further out. No problem for Zentner, but a mini-duel is developing between the two.

21' Zentner tips a stinging shot from Witsel over the bar. Good effort from the Belgian.

20' Chances for Mainz! After Sancho loses possession, Mainz play the ball quickly up to Mateta who crosses in towards Quaison, but Bürki clears. In the next attack, Mateta is sent through one-on-one but Bürki saves again. A timely reminder for Dortmund that this Mainz team has won their last two games – they can pose a threat!

18' Mainz try to attack down the left but a misunderstanding between Mateta and left-back Aaron results in a loss of possession.

17' A chip forward from Delaney finds Götze down the left but the 2014 World Cup winner is offside. Can Dortmund re-ignite that early fire?

15' The game has lost some of its early intensity as Mainz look to work their way into the match.

11' First half-chance for Mainz as Mateta cuts a cross back from the right, but Bürki is on hand to smother it.

10' The next cross from the right, this time from Piszczek, finds Reus in the box but the captain heads wide from seven yards.

9' Sancho crosses into the box from the right wing but Zentner is out quickly to smother the ball right in front of the lurking Götze. A really dominant start from the visitors so far.

6' Mainz are struggling to get on the ball in the opening stages as the Dortmund immediately put them under pressure.

4' Dortmund have the first corner and the first big chance of the game. Zagadou rises to head Reus' corner towards goal but Zentner saves well. On the rebound, Witsel's effort is also blocked.

+++ KICK OFF! +++
Borussia Dortmund get us underway, playing from left to right in yellow shirts and black shorts. The hosts are in their traditional home strip of red tops and white shirts.