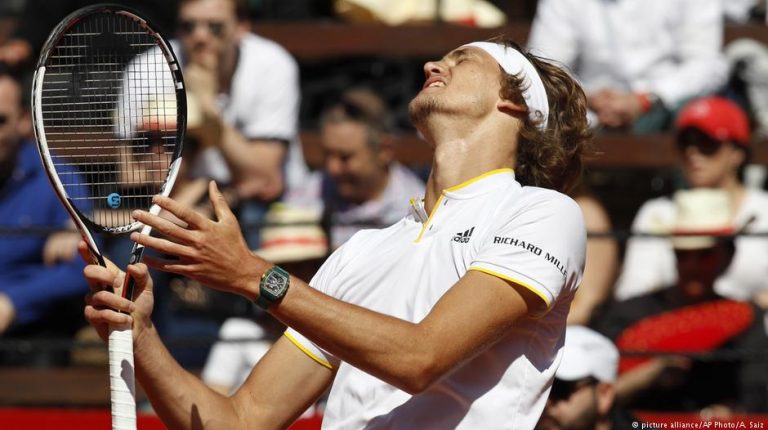 Rafael Nadal put Germany’s Alexander Zverev to the sword with a crushing win over the 20-year-old in Valencia. David Ferrer completed the job with a five-set victory over Philipp Kohlschreiber to send the Germans out.Rafael Nadal thrashed Alexander Zverev as Spain set up a Davis Cup semifinal against holders France with a dramatic fightback against Germany in Valencia on Sunday.

Two breaks in each set were enough for Nadal to seal an impressively comfortable victory over world number four Zverev in what was only the 31-year-old’s second match since returning from a hip injury.

“The first set was fantastic,” Nadal said afterwards. “There were times when I lost a bit of control because the match was tough, I had not competed for a long time and to maintain the level of the first set was complicated for me.”

It was also the 24th consecutive match Nadal has won in the Davis Cup. He beat Kohlschreiber in straight sets on Friday after Zverev had overcome Ferrer. Germany then took a 2-1 lead when Tim Puetz and Jan-Lennard Struff won the doubles rubber against Feliciano and Marc Lopez.

But Nadal did his bit on Sunday and the 36-year-old Ferrer fought to the end to keep Spain’s hopes of a sixth Davis Cup title alive.

Elsewhere, defending champions France booked their semifinal spot after Lucas Pouille claimed a hard-fought win over Italy’s Fabio Fognini in Genoa to give the visitors a 3-1 victory.