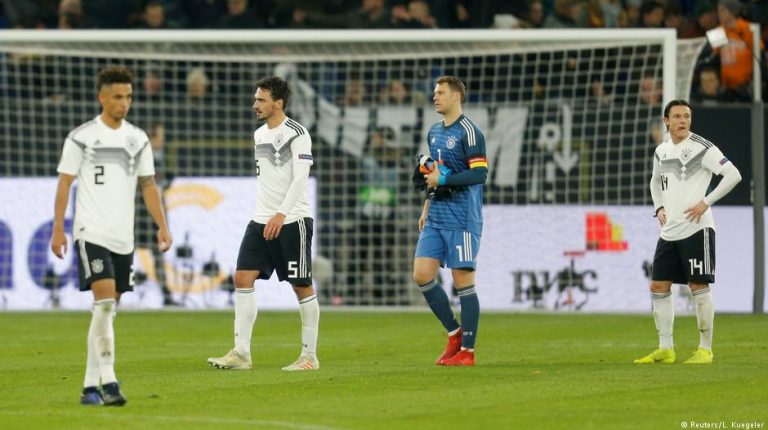 This year has largely been one to forget for Germany and, as winter arrived, Joachim Löw and his side showed their quality, but also their frailty. There’s much to take from Monday’s game, but also much to learn.Perhaps it was telling that after Leroy Sane, Timo Werner and Serge Gnabry were brought off, Germany threw away a two-goal lead. The truth is though, that even after that Germany had chances to end the contest. Failure to do so leaves a familiar, sour taste and sadly obscures many of the positives that were on display on Monday night.

Although it might have been apparent to some a long time ago, that attacking trio empathically declared themselves the present and the future of this team. Their passing was instinctual and into space, their movement off the ball encouraging. Putting Sane and Gnabry into positions to expose the opposition is a necessity Löw has finally recognised.

Gnabry’s flick to set up Werner's opener was exquisite, while Sane’s skill on the edge of the box merited the slice of fortune he got with the deflection for Germany's second. The Manchester City man is finally showing the one-on-one skill that makes him so dangerous at club level – partly because Löw is affording him the freedom to do so.

Papering over the cracks

“We know we didn’t deserve the result tonight,” Virgil van Dijk, who scored the Netherlands' late equalizer, told beIN Sports afterwards. For the most part, Germany delivered one of their best performances in some time but only had a point to show for it.

In a year when this team has got it wrong so many times, this night should have been one to recognize how right they can get it. Instead it was a reminder of the work that Löw has ahead of him.

“Perhaps a young side needs to experience this kind of game,” Löw said, somewhat astoundingly, afterwards. The ‘young side’ he started with didn’t look in danger of losing the game, and the slightly older one that finished it had more than enough experience to secure the win. In the end the combination of the youth and experience, the one Löw continues to rave about, cost him the game. Fortunately for them, there weren’t many were there to see it – only 42,186 attended.

Germany missed the chance to put the game to bed, leaving some fantastic interplay unrewarded, and they paid the price for it. They were also guilty of unnecessary hesitation on the ball, which slowed the tempo and let the Dutch back in. While Germany started the game like they cared again, they finished with a performance that that was a stark reminder of Russia.

Löw’s five defender base contained the Dutch pace for the majority of the game, but collapsed under the predictable onslaught that followed Quincy Promes’ strike. Germany’s sudden inability to mark the attacking van Dijk was perhaps as unsurprising as Mats Hummels’ decision to walk through the media area saying nothing other than that he was giving himself a break.

Off the back of one of the worst tournaments in their history, from a sporting and communications perspective, Germany are clawing their way back from the abyss. Their fans might expect an instant return to the status quo, but on the evidence of tonight this is a team still in the early stages of turning into something new. Led by a coach who is under pressure to show he can coach successful football in both the present and the future, this is the first part of a rebirth.

There are still some growing pains that this new team will have to endure, some of which were all too evident in Gelsenkirchen, but Löw looks to understand he needs to get his team playing faster and which players he needs to do so.

In the year France surpassed them, the Mexicans embarrassed them and (even) England showed them how to be a team, Germany took a step down the path to reinvention. Now they must commit to it.