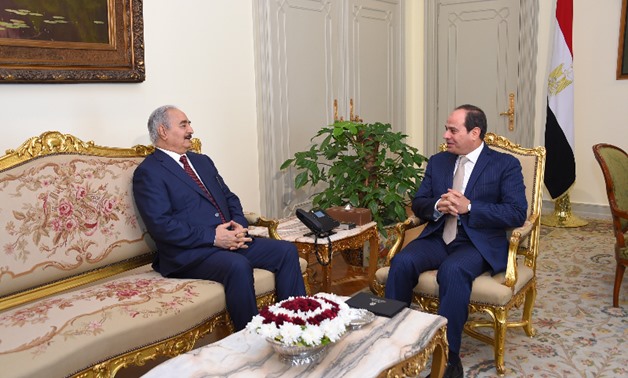 Libya’s army chief Khalifa Haftar met with Libyan Prime Minister Fayez Al-Sarraj for the first time in more than five months on the sidelines of the conference that came one week after the UN abandoned plans to hold elections next month.

Italy’s move is the latest to seek direct talks between various factions and rivals in Libya after the Paris summit in May reached an agreement between the Tripoli-based National Reconciliation Government and Haftar to conduct the national elections in December. Last week, the UN plan to hold elections in December was canceled.

Haftar arrived to Palermo to attend a mini-summit only among regional leaders, but did not attend the conference talks.

During the mini-summit, Haftar asserted it is inconceivable to allow armed militias to join the Libyan army, and commented on the term of “Organising of Libyan Army”, saying “there is no such thing called organising the army, it is re-arranging the troops”.

Egypt’s President Abdel Fattah Al-Sisi also attended the mini-summit, and said that proposal to resolve the Libyan crisis must consider the political, security, and economic aspects—given the crisis’ complicated nature—and be in compliance with the Libyan political accord and the UN envoy’s plan.

Al-Sisi called on all Libyans to shoulder the responsibility of implementing the accord. He also urged the international community to support a settlement in Libya without bias towards any party, and that this settlement should ensure that all factions are represented in the state.

The summit was attended by officials from Tunisia, Algeria, Niger, Chad, Italy, Russia, the UN and Libya upon an invitation from Italian Prime Minister Giuseppe Conte.