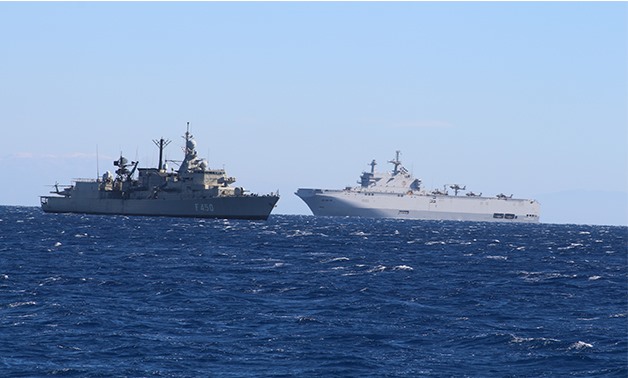 Egyptian and French naval forces started a maritime training exercise in the northern Mediterranean on Wednesday.

The training activities will provide ways to deal with the challenges facing maritime security, combating terrorism, protecting a vital sea target such as gas and oil ships. It will further include the implementation of sailing formations, signal-handling exercises, air attack prevention, training to protect a ship if crossing hazardous areas, and to inspect suspected vessels.

The training comes to support areas of military cooperation, as an exchange of training and fighting experience with brotherly and friendly countries.

In March, the Egyptian and French navies conducted a joint military drill in the Red Sea as part of the ongoing military partnership and cooperation between the two countries

In a similar context, Egypt’s Chief of Staff of the Armed Forces, Mohamed Farid, inspected on Tuesday the participating forces in the joint Arab military drills dubbed ‘Arab Shield 1,’ which started on Saturday and will end on 16 November.

Military forces from Egypt, Saudi Arabia, the UAE, Bahrain, Jordan, and Kuwait will partake in the exercises.

The military drill involves land, naval, air, special forces, and air-defense exercises, and is held at the Mohamed Naguib Military Base in Egypt’s north-western governorate of Marsa Matrouh.