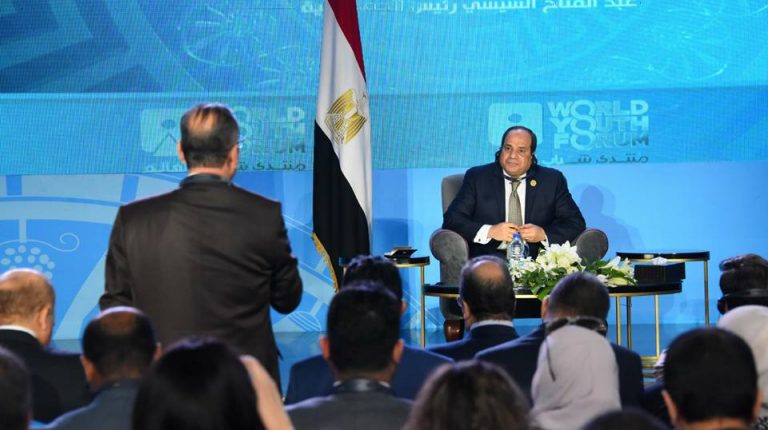 President Abdel Fattah Al-Sisi’s issued a few heated remarks regarding a some fervid topics during the meeting on Tuesday with foreign media representatives on the sidelines of 2nd World Youth Forum (WYF), which mainly focused on foreign affairs.

The president is expected to announce during the closing session the recommendations of the second WYF held in Sharm El-Sheikh with the participation of over 5,000 youths divided into 60 delegations from all over the world.

President Abdel Fattah Al-Sisi’s additionally received his Sudanese counterpart Omar Al-Bashir upon his arrival at Sharm El-Sheikh airport. Al-Sisi will hold bilateral talks with Bashir, who is also participating in the closing ceremony of the WYF.

Starting by relations with Gulf, Al-Sisi reiterated Egypt’s readiness to confront any aggression if the security of the Arab Gulf is exposed to any threat.

“If the Gulf security witnesses any danger or threat from any side, the entire Egyptian population, not only the president, will agree to send forces to repel aggression and support our brothers,” he said, asserting that, “Egypt will not accept any aggression against Arab national security.”

Regarding the case of journalist Jamal Khashoggi’s murder, Al-Sisi said that he is confident in the wisdom of Saudi King Salman bin Abdul Aziz, and in the ability of Saudi Arabia to overcome the crisis.

“Saudi Arabia is a big country, and no one can shake its stability, and Egypt supports it,” he added.

Commenting on the Saudi leadership’s involvement in the case, he said that the media played a negative role in relation to the issue of Khashoggi’s death, and that “we need to stop and wait for the relevant authorities and judicial bodies to announce the outcome of the investigations in this issue”.

Concerning the recent developments of Grand Ethiopia Renaissance Dam, Al-Sisi said that there are positive changes seen by Ethiopia during the past period in this regard, as there have been direct contact with the new leadership, thus Egypt “wants to turn Ethiopia’s good intentions into concrete agreements.”

He also said that Egypt seeks formal agreements with Ethiopia to cement the East African country’s assurances that the dam it is building on the main tributary of Egypt’s Nile would not be exploited for political purposes, and added that Cairo requests guarantees that filling the dam will not affect Egypt’s water share, and that the project “will not be used for political objectives.”

As for regional affairs, Al-Sisi said that Egypt supports the Libyan army as the national army authorised to maintain security and leadership in the country, especially that the continuation of the current situation there will attract more terrorists into Syria towards fragile areas and threaten neighbouring countries such as Libya, so Egypt calls on lifting the arms embargo in order to strengthen its capabilities.

“We wish that Iran would not interfere in the affairs of others, and we hope that everyone will realise the importance of respecting this,” said President Al-Sisi, asserting that armed militias should not be part of the political division in the Middle East.

Op-ed review: WYF’s success in the face of terrorism and critics