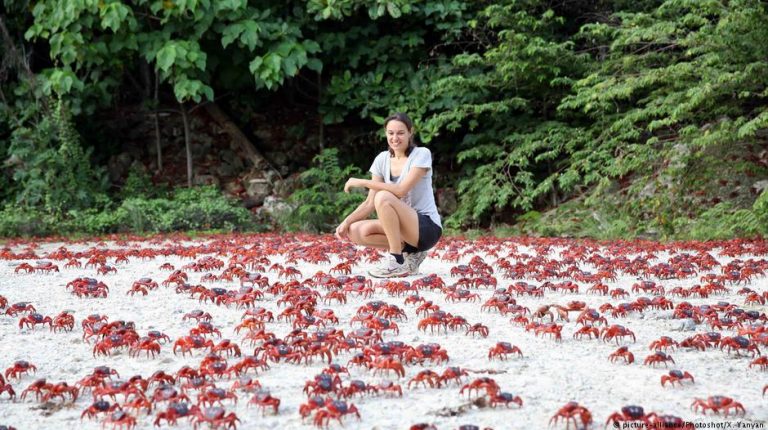 During the annual wet season, Christmas Island gets covered in a seething mass of millions of red crabs. The crustaceans cross roads and scale cliffs to reach the sea and breed in one of the world’s greatest migrations.Every year, tens of millions of bright vermillion crabs carpet the ground of Christmas Island, an Australian territory in the Indian Ocean, turning it into a sea of red.

It’s a spectacle that draws tourists to marvel at the stunning mass migration of a species found nowhere else in the world.

For most of the year, the estimated 45 million Christmas Island red crabs live very solitary lives in their forest burrows.

Although the crabs are active during the day, they prefer to stay in the shade — highly sensitive to moisture loss, the heat of direct sunlight can kill them by drying them out.

Their forest dens help the creatures to retain body humidity for the dry season, when the crabs plug up the burrow entrances with leaves and lie dormant for two to three months.

But as soon as the wet season starts in October or November, the red crabs race in an astonishing mass migration to their breeding grounds on the coast to meet a potential mate.

The island’s residents often help out by soaking migrating crabs, which must keep their gill chambers moist to survive.

Millions of creatures make their way to the seaside, sweeping over everything in their path, stopping traffic as they cross roads. Authorities have even built special crab tunnels and bridges to help keep cars and crabs apart.

Red crabs, thought to live as long as 20 to 30 years, are the only species of land crab where both females and males migrate to breed. In other land crab species, only the females march to the coast to deposit their eggs into the sea after mating inland.

This mass migration is also tied to the lunar schedule. The crabs arrive at the seaside and mate so that the females can produce eggs and develop them in burrows for about two weeks before releasing them into the ocean – exactly when the sea level on the beaches varies the least, during the last quarter of the moon. This makes it easier to transfer the eggs to the water. And it’s such an important step, that if the weather delays the migration, the crabs will postpone spawning until the next lunar month.

The baby crabs live as larvae in the sea for a month before returning to the coast, making their way inland to begin the cycle again.

With so many millions of red crabs living on the rainforest floor, they play a significant role in the island’s ecosystem.

The creatures feast on fallen leaves, flowers, fruits and seedlings, recycling nutrients and helping to determine how native flora is spread and its composition.

Originally, red crabs had no natural predators – that was, until humans accidentally introduced the yellow crazy ant to the island.

The yellow crazy ant is a formidable enemy for the crabs. Introduced some time between 1915 and 1934, by the 1990s the ants had started forming huge colonies with millions of workers. Since then, researchers at La Trobe University in Melbourne, Australia, suggest that the ants have killed tens of millions of crabs — a huge impact on the island’s ecosystem.

As red crabs eat leaf litter, the drop in crabs meant this leaf litter built up, carpeting the forest floor and causing the dirt tunnels once maintained by the crabs to collapse — removing hideaways for other creatures, and hurting biodiversity in the forest, leaving the crazy ants to reign supreme.

To try and combat the yellow crazy ants, scientists introduced Tachardiaephagus somervillei, a parasitic microwasp that attacks the food source of the ants. Results so far are indicating that, while not able to fully rid the island of the ant, it is helping put Christmas Island’s ecology back in balance, and helping restore numbers of its famous red crabs.