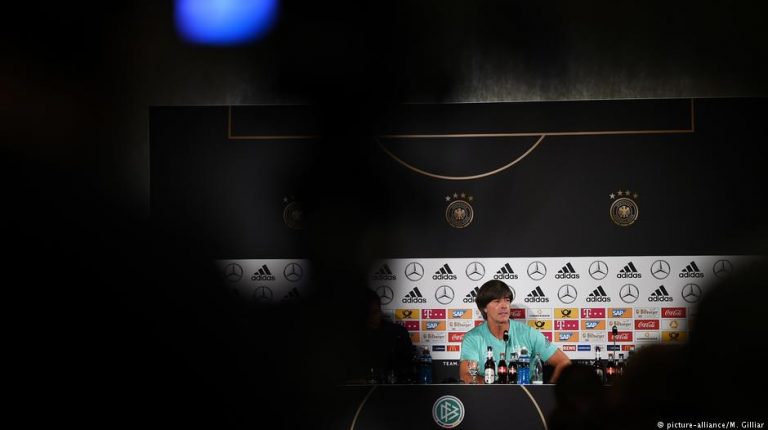 While other prominent figures have spoken out on issues such as discrimination and right-wing extremism in Germany, the country’s number one sport has been conspicuous by its absence, says DW’s Matt Ford.This week in Munich, German national team coach Joachim Löw plus several high-profile players were given the chance to comment on the subject of racism and discrimination in Germany in the wake of the Mesut Özil affair and events in Chemnitz which have dominated the news for over a week.

On Monday, several top German bands and musicians performed at a free, open-air concert organized against the far-right, attended by over 65,000 people under the motto: #WirSindMehr – there are more of us.

“This has nothing to do with left against right, but rather that anyone with normal decency, whatever their politics, stands up to an extreme-right mob,” said Andreas Frege, known as Campino, the lead singer of Düsseldorf band Die Toten Hosen. “We have to stop this behavior before the snowball becomes an avalanche.”

On Facebook, German President Frank-Walter Steinmeier addressed over 107,000 followers, stating: “Let us not be cowed by rioting, violent hooligans. Let us not allow our cities to become stages for agitation. Hate must not be given free reign in our country.”

And in Berlin, pop star Helene Fischer introduced her hit “Wir brechen das Schweigen” (We are breaking the silence) with a reference to Chemnitz, saying: “Raise your voice together with me, against violence, against xenophobia.” She also shared the hashtag #WirSindMehr with her 500,000 Instagram followers.

The message has come from all corners of society – with one glaring exception: the country’s number one sport and its primary representatives, the German Football Association (DFB) and the national team.

And yet, prior to Chemnitz, the biggest debate surrounding discrimination and racism in Germany concerned that very organization after Mesut Özil withdrew from the national team citing “a feeling of racism and lack of respect” in the wake of his ill-advised photoshoot with Turkish president Recep Tayyip Erdogan.

It took three foreign journalists to broach the subject of Özil, racism and discrimination in German football – a subject which Löw once again insisted was finished.

“In all my years in charge, there has never been racism of any form in our team,” he said. “Our players have always been extremely well-integrated.”

“Over the years, we’ve proven that players of all cultures are welcome,” added Toni Kroos, who had previously expressed the belief that “the issues that were quite rightly addressed in [Özil’s] statement were overshadowed by a significantly higher degree of nonsense.”

A day earlier, when asked about the team’s position on events in Chemnitz captain Manuel Neuer uttered barely more than 100 robotic words, including, “I thought the concert in Chemnitz was good” and “I thought it was good that many musicians and artists took part.”

Next to him, Thomas Müller and Julian Brandt remained silent until, 53 seconds later, another journalist moved the subject on to how Germany plan to compensate for the loss of Özil in midfield.

Three golden opportunities for five of Germany’s highest-profile sports personalities, including the national team captain and coach, to address an issue of immense national importance, and that was it?

Toni Kroos is right: the German national team has been a beacon for successful integration over the last decade – according to its official marketing campaigns, at least.

Unfortunately, Germany is also a country where, in recent months, a national team player has resigned citing racism within the DFB and where right-wing extremists have marched through the streets of a city giving Nazi salutes and attacking people of migrant appearance.

Are Germany’s professional footballers aware of the magnitude of those issues? Are they aware of the influence they could have on millions of people by speaking out? Or are they really so deeply entrenched in their bubble?

And are they remaining silent out of their own conviction or because they have been told to do so by a football association more interested in presenting a positive, shiny image ahead of the awarding of the 2024 European Championships in three weeks’ time?

It’s time for the German national team and the DFB to translate cheap slogans and mottos into actions. Because the problems are there, they are real, and, just like the atmosphere at Germany’s home games, the silence is deafening.