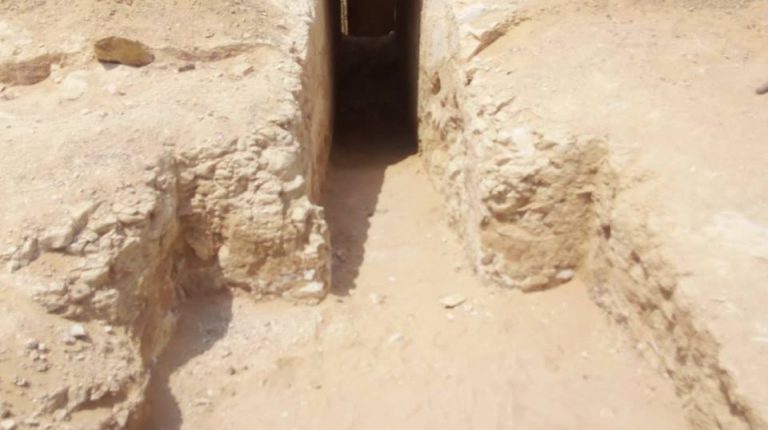 An Egyptian archaeological mission discovered a new cemetery near the Senusret I Pyramid at Lisht village in Cairo, known for having Middle Kingdom royal and elite burials, according to the Ministry of Antiquities.

The rock cemetery was found 300 meters north east the pyramid. It was discovered as a part of archaeological digging held by the ministry in the area.

Adel Okasha, the head of the Central Administration for Cairo and Giza Antiquities explained that the cemetery is carved inside the rocky edge of the mountain in the area.

He explained that the discovered parts consists of two parts; the first one, is a long opened yard that leads into an isle with a dome shaped ceiling which has Hieroglyphics on it.

The second part of the cemetery is the burial chamber, located in the open yard of the cemetery. The 3 meter depth chamber has an isle that leads to the first burial room and also the mission discovered an empty limestone tomb as well. The room has access to a second one, in which another limestone tomb was also found empty.

The mission is currently working on restoring the needed parts of the cemetery.

Alicia Keys, Swizz Beatz get ‘mind blown’ during their visit to Egypt

‘City of the Dead’: mesmerizing forgotten place in heart of Cairo

Inside the discovered cemetery in Minya