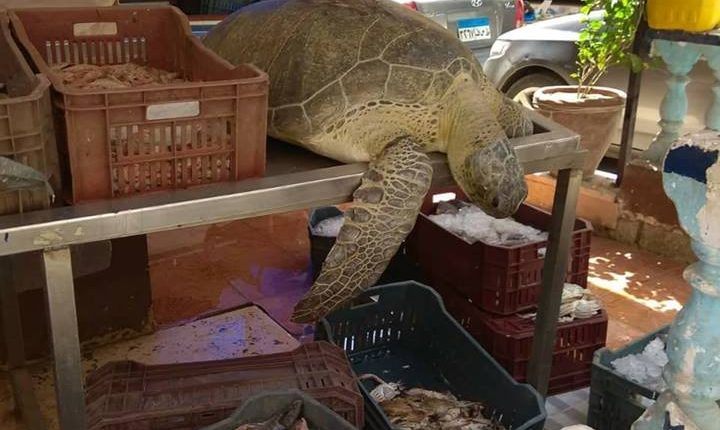 The Ministry of Environment announced on Saturday saving a rare turtle from being sold in Suez and returning it to its natural habitat in the governorate. Marine turtles are globally at threat of extinction and locally, it is forbidden to catch or eat them.

The ministry’s statement did not clarify the exact type of the turtle. However, it described it as an extremely rare type that is globally at threat of extinction.

The old sea turtle was set to be sold at one of the fish markets in Suez, when a member of the Blue Team organisation, an NGO standing for environment-saving causes and raising people’s awareness of environmental threats, noticed it and contacted the enlivenment affairs section at the ministry and requested to save it.

The owner of the fish market told local media outlets that he had bought the turtle from a fish trader who catches and sells them for “huge amounts of money.”

The Ministry of Environment’s press release stated that the market owner immediately handed the turtle to authorities to return it to its natural habitat once he learned it is a rare kind of sea turtle.

The owner also told a local media outlet that he did not know that this kind of turtle faces extinction when he bought it from the trader, adding that he was “not aware how rare this type is.”

The ministry, with the help of experts from the National Institute for Oceanography and Fisheries, returned the turtle immediately to Al-Sadat beach in the Gulf of Suez, where it is believed to have originally lived.

Pictures of the marine turtle being set back to sea went viral on social media as people curiously followed the process of releasing it.