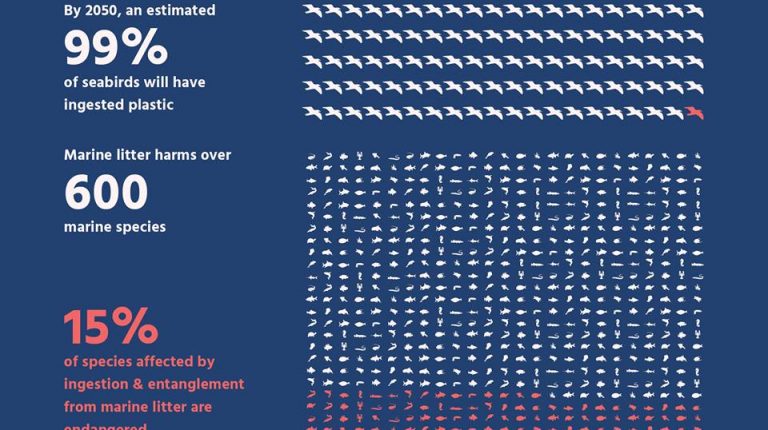 Plastic pollution has become an epidemic which threatens our environment and cause serious dangers to marine biology. In its celebration of World Environment Day 2018, the United Nations Environment Programme (UNEP) illustrated that every year, we throw away enough plastic to circle the Earth four times.

Much of that plastic waste ends up in oceans, where it is responsible for killing 1 million seabirds and 100,000 marine mammals every year, according to the UNEP. Enormous quantities of plastic particles can be found in the water in virtually every sea and river. It harms marine life by the tiny plastic particles floating in the water. One other problem happens when fish, seabirds, or marine mammals mistake the particles for food and consume them, and the fish could then be consumed by humans.

A new study sheds light on the danger of microplastic pollution in our oceans. The researchers of the study found microplastics in the stomachs of nearly three out of every four mesopelagic fish caught in the Northwest Atlantic, one of the highest levels globally.

Microplastics are small plastic fragments that have accumulated in the marine environment following decades of pollution. They could cause serious dangers for marine organisms that feed on them, including inflammation, reduced feeding, and weight-loss.

According to the study, microplastic contamination may also spread from organisms to other organisms along the process of the food-chain, when prey is eaten by predators. Since the fragments can bind to chemical pollutants, these associated toxins could accumulate in predator species.

Findings of the study, published in the Frontiers in Marine Science journal, expressed concerns as the affected fish could spread microplastics throughout the ocean. The fish are also prey for fish eaten by humans, which means that microplastics could indirectly contaminate our food supply through the transfer of associated microplastic toxins.

Alina Wieczorek from the National University of Ireland, Galway, who is lead author of the study, said “microplastic pollution has been in the news recently, with several governments planning a ban on microbeads used in cosmetics and detergents.”

“The high ingestion rate of microplastics by mesopelagic fish that we observed has important consequences for the health of marine ecosystems and biogeochemical cycling in general,” said Wieczorek.

Mesopelagic fish is a food source for a large variety of marine animals, including tuna, swordfish, dolphins, seals, and seabirds. Despite living at depths of 200-1,000 metres, mesopelagic fish swim to the surface at night to feed then return to deeper waters during the day. Through these vertical movements, mesopelagic fish play a key role in the biogeochemical cycling processes, which means cycling of carbon and nutrients from the surface to the deep sea.

This means that they could spread microplastic pollution throughout the marine ecosystem, by carrying microplastics from the surface down to deeper waters, affecting deep-sea organisms, illustrates the study.

To investigate the important role of mesopelagic fish in marine ecosystems further, Wieczorek and colleagues set out to catch fish in a remote area of the Northwest Atlantic Ocean: an eddy (whirlpool) off the coast of Newfoundland. The team caught mesopelagic fish at varying depths, then examined their stomachs for microplastics back in the lab by using a specialised air filter so as not to introduce airborne plastic fibres from the lab environment.

“These fish inhabit a remote area, so theoretically they should be pretty isolated from human influences, such as microplastics. However, as they regularly migrate to the surface, we thought that they may ingest microplastics there,” explained Wieczorek. “We recorded one of the highest frequencies of microplastics among fish species globally,” said Wieczorek. “In particular, we found high levels of plastic fibres such as those used in textiles.”

As the researchers were extremely careful to exclude contamination with fibres from the air, they are confident that the fish had ingested the fibres in the sea. Finding high levels of fibres in the fish is significant, as some studies investigating microplastics in fish have dismissed such fibres as contaminants from lab environments, meaning their role as a pollutant may have been underestimated.

The Nile River is one of 10 rivers that are the main culprits for plastic pollution in the oceans. Those ten rivers, alongside the Nile and the Niger in Africa, are the Yangtze, Yellow, Hai He, Pearl, Amur, and Mekong in East Asia and the Indus and Ganges in South Asia, according to a previous study.

The study, which appeared in the Environmental Science and Technology journal, shows that those 10 rivers contribute between 410,000 and 4m tonnes a year to oceanic plastic debris, 88-95% of total plastic pollutants.

The interdisciplinary research team of German hydrologists and specialists in environmental engineering analysed a global compilation of data on plastic debris in the water column across a wide range of river sizes.

One of the findings of the study refers that plastic debris loads, both microplastics that are smaller than 5 mm, and macroplastics that are larger than 5 mm, are positively related to the mismanaged plastic waste (MMPW) generated in river catchments. This relationship is nonlinear, with large rivers with population-rich catchments delivering a disproportionately higher fraction of MMPW into the sea, according to the study.

Christian Schmidt, a hydrogeologist at the Helmholtz-Centre for Environmental Research (UFZ) in Leipzig, Germany, and lead author of the study, said, “it is still impossible to foresee the ecological consequences of this. One thing is certain, however: this situation cannot continue, but as it is impossible to clean up the plastic debris that is already in the oceans, we must take precautions and reduce the input of plastic quickly and efficiently.”

But on the other side, we have an earlier study saying that although microplastics are increasingly seen as an environmental problem of global proportions, especially in the ocean and their effects on marine life, researchers are concerned about the lack of knowledge regarding potential consequences of microplastics in agricultural landscapes from application of sewage sludge.

Sewage sludge is, in principle, waste, but it can also represent a resource in agriculture and horticulture. Fertiliser based on sludge contains valuable nutrients, but sustainable use requires that levels of undesirable substances in the sludge are kept under control. Waste water treatment plants receive large amounts of microplastics emitted from households, industry, and surface runoff in urban areas. Most of these microplastics accumulate in the sewage sludge, according to the study which was published in the journal Environmental Science and Technology.

The researchers behind the article are Luca Nizzetto and Sindre Langaas from the Norwegian Institute for Water Research (NIVA) and Martyn Futter from the Swedish University of Agricultural Sciences (SLU) in Uppsala.

“We have found figures from the Nordic countries suggesting that a large fraction of all the microplastics generated in Western societies tend to end up in the sludge in wastewater treatment plants,” says Nizzetto. Via the sludge, the particles are transferred to agricultural soils.

In the same context, the smallest microplastics in our oceans, which go largely undetected and are potentially harmful, could be more effectively identified using an innovative and inexpensive new method, developed by researchers at the University of Warwick.

The research team of the study, led by Gabriel Erni-Cassola and Joseph A Christie-Oleza from Warwick’s School of Life Sciences, has established a pioneering method to detect the smaller fraction of microplastics, many as small as 20 micrometres (comparable to the width of a human hair or wool fibre) using a fluorescent dye.

According to the study which was published in the Environmental Science and Technology journal, the dye specifically binds to plastic particles, and renders them easily visible under a fluorescence microscope. Based on this method, scientists were able to distinguish microplastics amongst other natural materials and it made it easy to accurately quantify them.

The researchers took samples from surface sea water and beach sand from the English coast around Plymouth and after extracting the microplastics from these environmental samples, they applied their method and were able to quantify the smaller fraction of microplastics effectively.

According to the paper, scientists detected a much larger amount of small microplastics (smaller than 1 mm) than was previously estimated, and significantly more than would have been identified previously through traditional methods.

What makes it very important is that these results challenge the current belief of the apparent loss of the smallest microplastics from surface seawater, highlighting the need of further research to understand the real fate of plastic waste in the oceans.

“Using this method, a huge series of samples can be viewed and analysed very quickly, to obtain large amounts of data on the quantities of small microplastics in seawater or, effectively, in any environmental sample,” said Erni-Cassola.

Microplastic menace has spread to the world’s most remote oceans

‘Not enough action from EU on plastic’

Sunken oil tanker: How to protect the high seas environment?