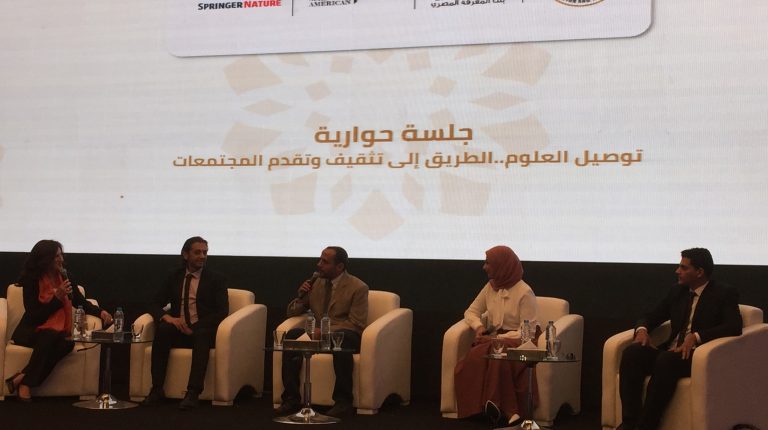 Scientific American Arabic Edition (For Science) and the Egyptian Knowledge Bank announced on Friday night, the official inauguration of the Mansoura University Vertebrate Palaeontology (MUVP) to be the first of its kind in North Africa and the Middle East (MENA).

Ministers of Education, Tarek Shawky, and Environment Minister, Yasmine Fouad, and Ashraf Abdel Basset, the president of Mansoura University, as well as representatives from the UNESCO in Egypt presented in the celebration which was hosted by Springer Nature.

Founder and Director of the centre, Hesham Sallam, said during the celebration that he was dreaming about establishing such a centre for research in vertebrate palaeontology, and training Egyptian researchers in this field, for about 11 years.

“Finally, we succeeded in forming a scientific school and publishing studies and discoveries of Egyptian researchers in major international journals including Nature journals,” he said.

Sallam added the centre’s researchers cooperate with international and regional universities in exchanging experience. He hopes that he and his team’s efforts could lead to the establishment of a museum of Egypt’s natural history.

Shawky, the president of the Egyptian Knowledge Bank, noted that the celebration contributes to supporting scientific research and the settlement of scientific knowledge, as well as highlighting the efforts of Egyptian researchers.

Furthermore, Shawky expressed happiness at the joint coverage of the Egyptian Knowledge Bank and For Science, for the achievements of Egyptian researchers.

“The magazine is an important tool for promoting science and supporting scientific culture in Egypt and the Middle East region,” he said.

For her part, Fouad, welcomed the opening of the centre and stressed the cooperation and support of her ministry in advance and continuous cooperation with the centre to facilitate their tasks and exploratory trips in prospecting for excavations in nature reserves.

Chief editor of For Science magazine, Dalia Abdelsalam said that the purpose of the event is to shed light on the importance of vertebrate fossils in general, especially in light of the presence of Egyptian scientists who are making distinctive discoveries in this field, including the Egyptian dinosaur Mansourasaurus.

She added that For Science is interested in covering great scientific discoveries and simplifying science for the non-specialist reader in an attempt to innovate a third language that combines science and journalism.

Abdelsalam also stressed that Springer Nature’s sponsorship of the event represents one of the company’s objectives of transferring real scientific knowledge to the Egyptian and Arab public.

Ministry of Environment has a plan for “black clouds season”